On Monday, September 9, 2013, Professor Ezra F. VOGEL, a Henry Ford II Professor of the Social Sciences Emeritus at Harvard University, a researcher of China and author of Japan as Number One, delivered a special lecture at APU entitled “China’s Foreign Policy and Sino-Japanese Relations in the Post-Deng Xiaoping Era”. More than 300 students and other guests listened intently to Professor VOGEL’s lecture. 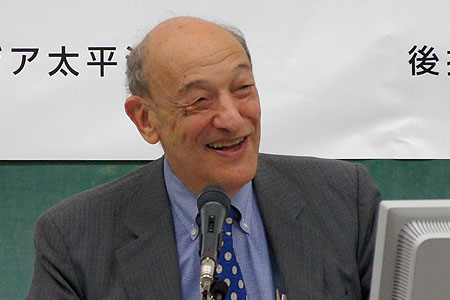 Professor VOGEL discussed in detail the efforts of Deng Xiaoping, also known as the “Father of Modern China”, who worked tirelessly towards the modernization of China and the improvement of relations between Japan and China. He explained, “Deng Xiaoping believed in the promotion of peaceful relations between Japan and China. His forward-thinking policies placed great importance on cultural and student exchange. His policies can be applied towards ongoing efforts to improve Japan-China relations.”

In the question and answer session, Professor VOGEL discussed Japan-China relations further by stating, “The Chinese people must understand Japan’s deference to peace following the war as well as Japan’s ongoing contributions to peace worldwide.” He continued by explaining the need for level-headed foreign policy in Japan towards China and mentioned the visits of officials to Yasukuni Shrine as well as the Murayama Danwa(On the occasion of the 50th anniversary of the war's end). 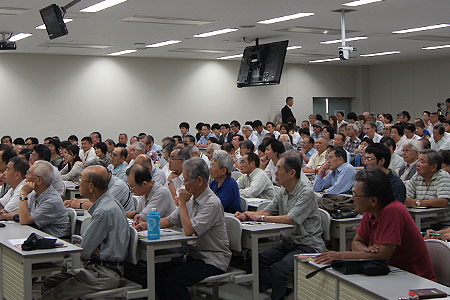 Attendees of the lecture included Oita Prefecture Governor HIROSE Katsusada and Prefectural Governor and former Prime Minister MURAYAMA Tomiichi.  The special lecture was broadcast on Ustream and can be viewed there as a video entitled “APU Gallery: Ezra F. Vogel Special Lecture”.

This lecture was held with support from Oita Prefecture and the Oita Godo Shimbun.Professor VOGEL is also an Academic Advisor* of APU as well as a Toyo-no-Kuni Kabosu Special Ambassador.