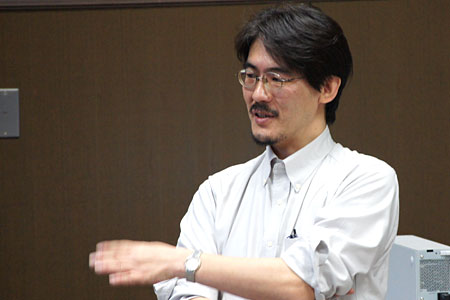 Since joining Mainichi Shimbun 23 years ago, Mr. YANO has worked in the city news section of the Tokyo headquarters, where he covered the Metropolitan Police and National Tax Authority, and the foreign news section. Based on his experience as the Manila Bureau chief, he introduced several episodes from stories he covered on the issues facing the countries of Southeast Asia, including the Philippines, Myanmar and Singapore. He carefully recounted his interview with Aung San Suu Kyi, the leader of Myanmar's democracy movement, in November 2011, which was the first by the Japanese media. "After the interview, I sent the article I wrote back to Japan from an internet cafe, then I burned all of my notes." He also spoke about the situation in Myanmar after Suu Kyi's release. The audience was riveted by this heart-pounding story.

Following the lecture, Mr.YANO then responded to each of the many questions raised by the student audience.

Since 2010, APU has been arranging Social Outreach Seminars and inviting business representatives, entrepreneurs and experts to speak to our students as an opportunity to gain the skills and knowledge graduates need out in the workplace.