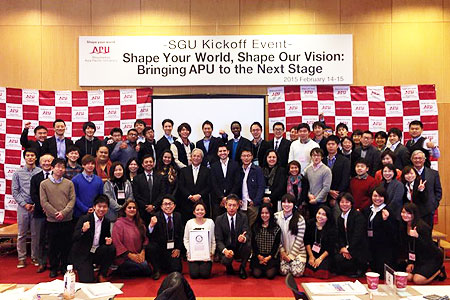 The “–SGU Kickoff Event- Shape Your World, Shape Our Vision: Bringing APU to the Next Stage” was held at the Multipurpose Hall in APU campus during the weekend of February 14th and 15th, 2015.
For 2 days, there were hot discussions about what APU should be in the future after engaging in the SGU (Top Global University project) initiative.
What’s unique about this event is that alumni, students, teachers, and staff members sit at the same table and discuss together about APU as “APU people” regardless of position, age, nationalities or cultures. This is the first time in APU history to have this kind of opportunity.
70 people from 20 different nationalities participated in this 2 day event. Among them 24 Alumni Chapter members came from far away countries like Tonga and India. They split into 11 groups for group works.
The event kicked off at13:30 with the opening remarks from President Korenaga, and later an introduction about the group work of the 2 days was given by the general facilitator Associate Prof. Hirai (Education Development and Learning Support Center). After that the student leader conducted an icebreaking game and the discussions finally started.
For discussions this time, the AI (Appreciative Inquiry) method was adopted. This is done by finding APU’s strengths and characteristics and then picture APU’s future by maximizing them.
First a “High－Point Interview” was conducted in pairs to “find the source of our energy in APU by looking back at experiences that happened in APU and that remain in our hearts” . After both parts talked about many experiences (High Point）one presented the story of the other within the group.
After that, still in pairs, they “looked for the Positive Core” in their experiences. A positive core is what gives a person happiness and energy and moves their heart. They found the positive core from each other’s story and then wrote them down. All participants then split them into categories (applying KJ method). APU’s Positive Core could then be seen in the group.
Then the Positive Core was expressed not only in words but materialized in an object, a visual form, using paper, clay, ribbon and polystyrene. APU was represented with a sun, boat, trees, etc. some keywords were added and we could finally see the ideal APU and its value in a tangible form. 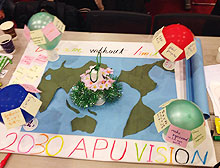 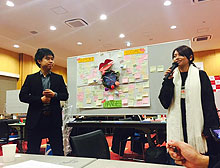 The original plan was to move to Pacific Café for dinner but since all groups were immersed in creating the Positive Core, everyone collaborated to bring the food and dishes to the Multipurpose Hall. Again in this occasion, alumni, students, teachers, and staff members demonstrated “APU power” by joining forces into one and were able to prepare everything smoothly. Every group had fruitful conversations while eating and were able to overcome their position and ages to have a deep conversation.
After eating, the object created was presented. Objects created by the 11 groups were put in front and with them APU’s Positive Cores were presented one by one. There was a team that presented using human body instead of materials. There were considerably many groups that came up with Challenge and Change. It seems that many people think that the source of APU’s value is in constantly transforming oneself by always trying new challenges. 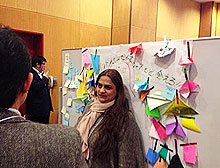 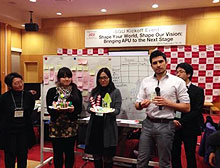 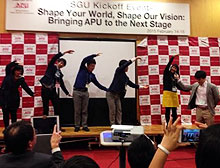 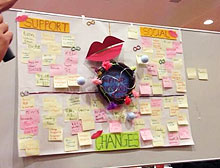 The first day concluded here and it was already past 20:00 by the time the group photo was taken before everyone went home.

There was also an icebreaking game first on the 15th by the student leader where everyone danced. By doing this everyone had their spirits up. Seeing this, president Korenaga even said that this should be APU’S regular dance from now on. 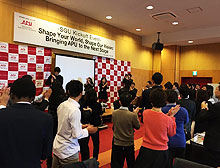 After this, based on APU’S characteristics and Positive Core from the previous day, there was a discussion about APU’s ideal future vision and what we should do to realize it. Despite the current situation, they thought about the best shape of APU. The same groups as the previous day discussed what values are important, in detail what kind of curriculum and programs are being thought, and the impact towards the surroundings.
Many ideas were born. For example, expanding the campus overseas (borderless campus), developing distance learning, further develop active learning, more diverse language education, partnerships with international organizations, developing classes for the community, encouraging more students to go on to graduate schools by strengthening education, participation of alumni in practical learning, strengthening collaboration with alumni, establishment of affiliated schools, diversification of specialized education, strengthening internships, strengthening of workshop for 1st years students, developing business studies in Asia, alumni’s collaboration in employment and internships, dispatching students to international competitions and conferences, issuing certificates for participating in student activities (and a website that explains the contents), establishing a support system for students by alumni, professors and staff, introductions of the real world by alumni to the students, facilitating participation of staff in student activities, develop online language lessons for alumni, etc. One group had a magnificent vision that through these initiatives, they want APU to create a “wave of love” that will lead to world peace. 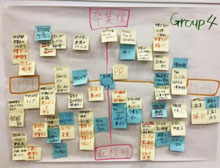 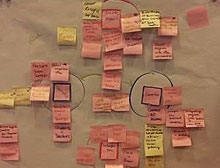 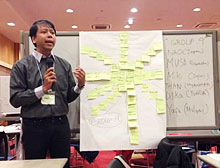 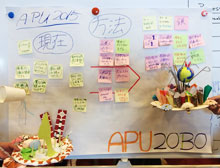 Every group had their own way of presenting and in every one of them the students were able to vigorously present and say their opinion without being intimidated by older teachers and staff. The participants also mentioned that alumni, teachers, students and staff being able to cooperate together was one of the sources of the strength of APU.

The group work ended here. Then Prof. Kondo, Chairperson of SGU Taskforce delivered a presentation regarding SGU at APU. It was perceived that SGU will become a big platform to shape the ideal APU since many of the initiatives of the SGU project were present in several of APU’s future plans discussed in this event. Also, since it is part of the SGU plan to involve alumni in many of the university’s activities, these plans were explained in detail and the alumni participating were asked to share this information with their respective Chapters. *SGU: http://www.apu.ac.jp/home/news/article/?storyid=2577

At the end, President Korenaga said some words of appreciation to the participants and expressed that APU will become one of the world’s top class global learning university.
The valuable points of view that came up at this Kickoff event will be used for reference in many ways when planning APU’s long term policies. With this kind of events, we hope that we can build APU’s future together and keep on receiving everyone’s support.
Finally we would like to thank everyone who participated despite their busy schedules.

Messages from the participants
・Otsukare samadeshita for all the arrangements for us alumni to be part of this very important event. We look forward to great successes for APU in the coming years, we're proud to be part of this milestone for APU and current and future students esp from Tonga. Arigatou Gozaimasu ofa atu.
・Students, teachers and staff discussing and then the process of putting together many ideas into one project in a short amount of time was very interesting. I want many students to experience this.
・The contents of the second day (process of coming up with something concrete) were especially useful and became motivation. It was an event connected to motivation towards the future. I think it would be good to have it again as an event planned by students.
・I am speechless. Thank you very much for inviting me. I suggest to pick the best students and make them work on this project and at the end of a semester, bring professors, staff along students and alumni together to see how much improvement has been made and what is the next step.
・For the first time I felt how much every member of APU family is willing to contribute to have a “better APU”, from students, alumni, staff and faculties. Everybody is energetic, we need to utilize this enormous valuable core of APU. The best part of these two days was the time we had to talk/share and brainstorm between us (students, alumni, faculty and staff).