Over the weekend, students organized some fabulous events over 2-days on campus.
On Saturday, April 22 more than 700 people including APU students and citizens from Beppu City and Oita Prefecture came to participate in the unique session with Film Director IZUTSU (maker of the film "Pacchigi") organized by the student circle "Koko Korea".

Director IZUTSU and "Koko Korea" circle member IMAMURA Mio (APS 3) led the interactive session and the Director spoke in detail about his experience making the movie "Pacchigi". When asked about the movie's meaning, the Director replied that it was a movie about coexistence. "I think many people think that Japan is only shaped by Japanese, but I wanted to convey that Japanese society consists of people from many different backgrounds. I hope people will embrace this knowledge and be inspired to live more fulfilling lives."

The Director's message to members of "Koko Korea" and participants in the session was to while finding yourself, get to know others, and try to work out what gives you passion in life. 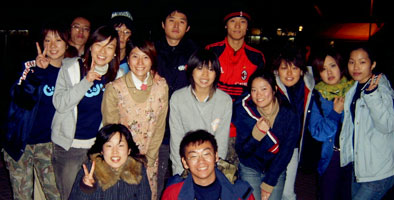 From 2 o'clock on the following day, April 23 (Sun), the Ritsumeikan Asia Pacific Symphony established in October last year held their 1st Regular concert in the APU Millennium Hall. Members of the APU Symphony were joined by guest musicians from the Oita University Medical School Orchestra and 40 citizens from Oita Prefecture. Approximately 400 people listened attentively to conductor SHIMADA Koichi lead the orchestra in beautiful renditions of Mozart's "The Impresario Overture" and Beethoven's "Symphony No. 1".

After a delightful performance of Dvorak's "Symphony No. 9 from the New World", the audience erupted into a large round of applause. The curtains fell on a hugely successful 1st regular concert. 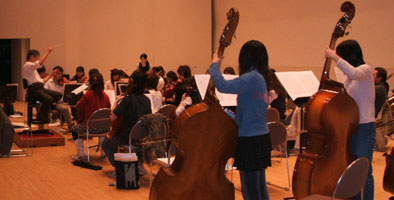