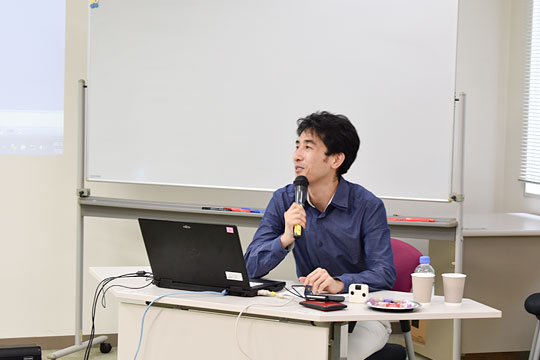 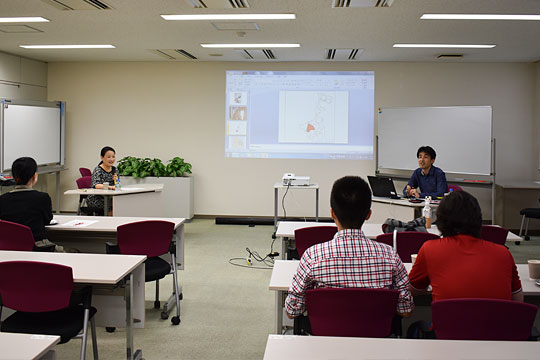 Dr. Kitada is a polyglot researcher actively engaged in the study of South Asian languages and cultures, conducting field work ventures as a part of his research. For this particular seminar, Dr. Kitada presented a broad array of rare video footage of folk performing-arts performed mainly in Bengal by people of the Bankura District. His explanation of the performances revealed the fact that many are based on a consistent theme depicting a relationship between a Hindu god and a human being, which is usually performed by young female dancers and dates back to the 16th century. He said that he was particularly attracted by folklore performances by village people whose styles remain ‘genuine’ in the sense that they have not been ‘commercialized’ as evidenced, for instance, in the traditional dances performed by a highly experienced elderly female in a local village. 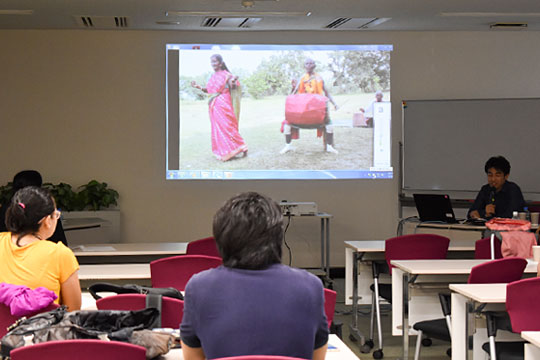 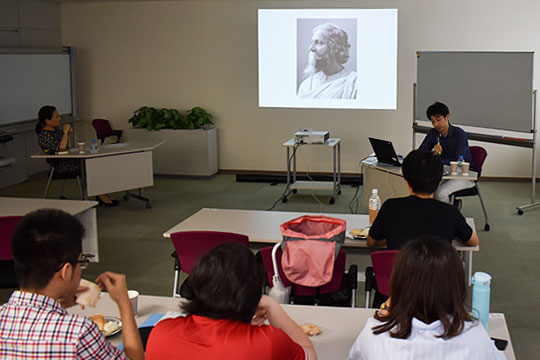 The music is typically composed of vocalists narrating the folklore with traditional instruments and are at times accompanied by modern percussion instruments in the background, which further accentuates the sentimental and romantic ambience of the dance performances. A collection of photographs of the local architecture and religious ceremonies helped the audience gain a deeper understanding of the local culture and lifestyle.

When asked if these traditional forms of performances or music are supported by the national or local government so they can be inherited by younger generations, Dr. Kitada explained that sadly there is a lack of effort and funding to preserve the traditional performances. They also tend to be neglected by modern mass media. Since these local traditions are considered as deviating from the norm, folk performing-arts are on their way to becoming extinct.

A detailed study of the traditional music and theater in one particular area exposes the audience to a unique variety of rarely accessible performing styles, provoking thoughts on how religious beliefs and social status intermingle with and influence the inheritance of traditional forms of art.

APU’s Research Center for Asia Pacific Studies (RCAPS) facilitates seminars that are designed to inspire research on the Asia Pacific region by APU faculty members and graduate students (onigiri, meaning rice ball in Japanese, symbolizes the light snacks that are provided). In the 2017 academic year, topics ranged from kamishibai (Japanese traditional paper theater) used during wartime, cost and management accounting principles pertaining to fashion businesses, how popular culture provides insights into society, politics, economics, and history, as well as the relationship between Japan and the United States. A topic related to music and theater has further broadened the scope of the RCAPS Onigiri Seminars. The seminar was chaired by Associate Professor Yukiko Takashiba of the College of Asia Pacific Studies.