On December 23 and 24, 2019, 15 directors from various divisions of All Nippon Airways participated in a training session at APU.

This session was part of a year-long series of training sessions that ANA holds throughout the year for managers it deems to have potential as future company leaders. ANA chose APU as the venue in the hopes that exposure to students from different countries and of different ages would stimulate the employees by providing them with new insights and enhancing their ability to come up with new ideas.

The employees were divided into three teams (A, B, and C), and five or six APU students representing 11 countries and regions were added to each team. The teams were then tasked with discussing the future of transportation. After the discussions, the groups summarized the ideas they came up with and gave presentations. This was followed a Q&A session in which the trainees and the APU students asked several questions. 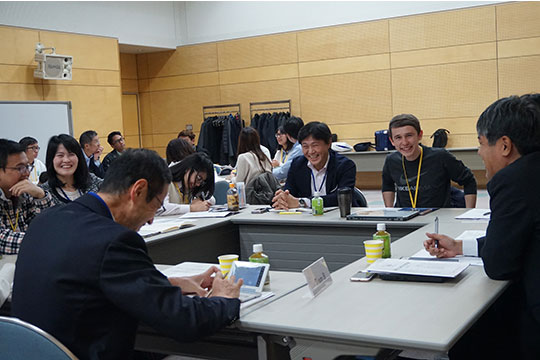 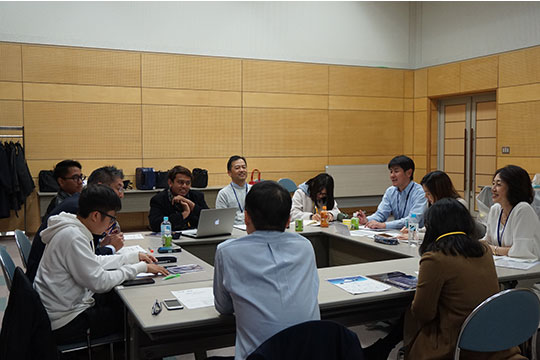 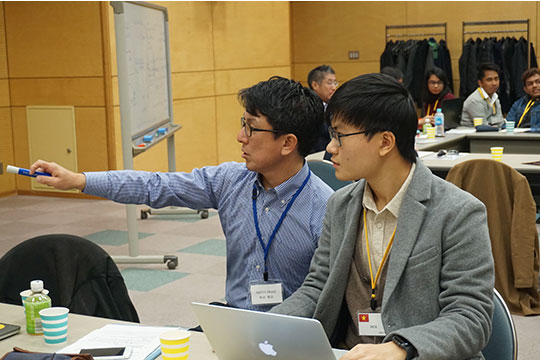 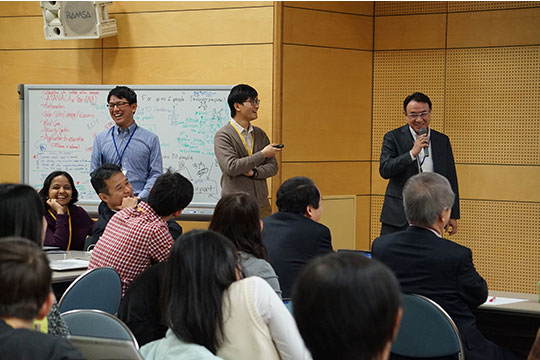 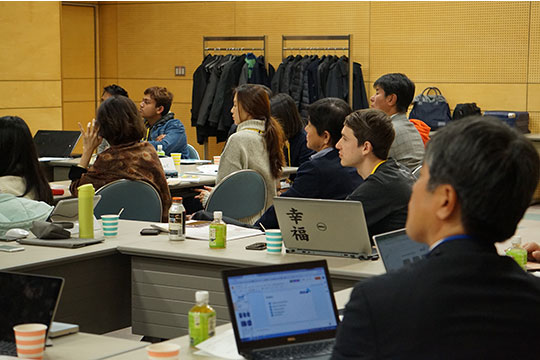 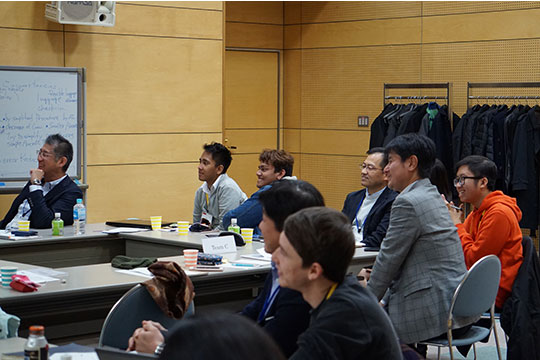 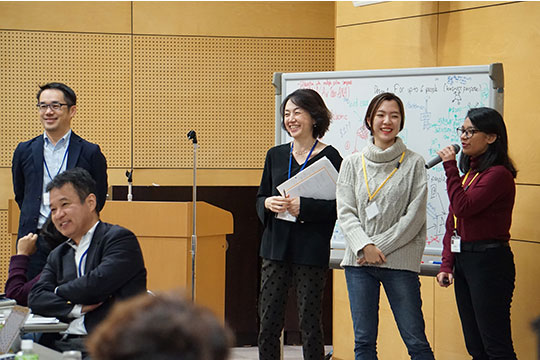 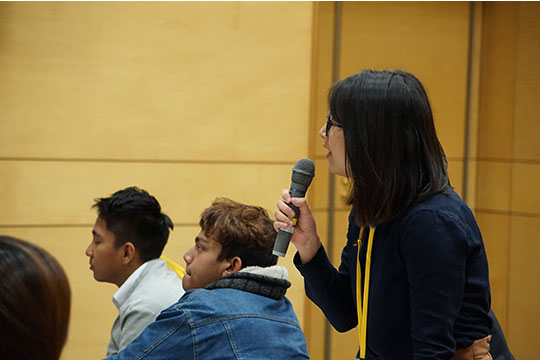 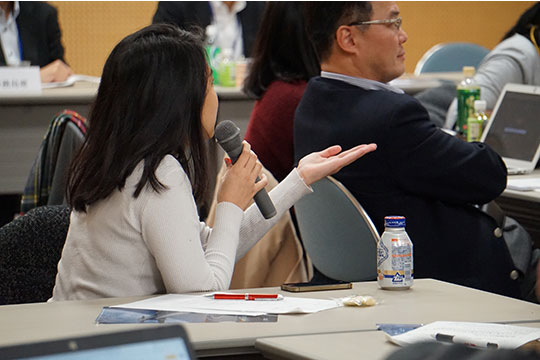 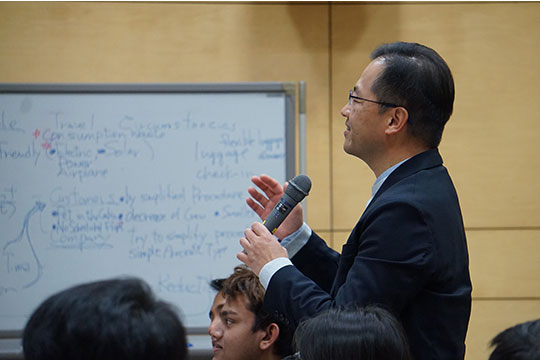 Dr. Kozo Yamada, a professor in the Faculty of Economics at Sophia University, served as the program facilitator and was impressed by the performance of both the trainees and the APU students. “The trainees and the students both thought about this topic carefully from their respective positions. I was impressed by how interesting and clear the presentations were. Each team talked about how to address the changes that the industry will face going forward, the level of impact their proposal would have, the uniqueness of their proposal, and a resource plan for bringing their proposal to fruition. All three teams gave three very different presentations, but they all shared the same basic understanding about how the environment is changing. Meanwhile, each team took a different approach to human resources and funding. Some of them took the stance that industries and industry classifications are bound to change and that the transportation industry could merge with another industry in the future. I hope all the APU students could use this opportunity to learn how businesspeople think and what they focus on, and I hope they will apply this to their future studies in Japan. The frameworks and perspectives that each team adopted reflect Japanese culture and society, so, I hope the students will take full advantage of this given that they are studying in Japan.”

Next, President Haruaki Deguchi provided his comments on the presentations. “I sincerely hope everyone found this training session enjoyable.”

“What I liked about Team A’s proposal was that they thought about the goals in terms of a timeline. In a management setting, if you have five goals you want to achieve at the same time, you typically need to prioritize them. You have to decide which one is the most important for the operation of the company. If you add a timeline, however, this changes the priority ranking. A company’s priorities will differ for the things they need to do in the coming year versus the things they need to implement over the next five or 10 years. The best part of Team A’s proposal was separating the short-term goals from the long-term goals for every task.”

“Next, I think Team B’s proposal would receive the best evaluation in an actual company setting. They used a decision matrix to ensure that every point that needed to be considered was covered. They employed an approach that would guide them to a detailed plan by keeping track of things to be mindful of. In any organization, any time you try to persuade people to your point of view, many opinions will be raised. Making sure you have covered all your bases beforehand is one approach to handle this situation. This proposal clearly shows me that the employees of ANA have been trained to do this as a regular part of the job.”

“Finally, Team C's proposal focused on the environment, a topic that does not always mesh with business, and I think it was important that they presented a range of ideas related to this topic. Although some people would lean toward eliminating the non-feasible ideas right away, some of these ideas may hold clues or point to future issues. I was impressed that the team dared to choose eco-consciousness as a core pillar of its discussion.”

“In my opinion, the fact that just three teams came up with such different conclusions is evidence that you all seek to learn a wide range of things as a matter of routine.” 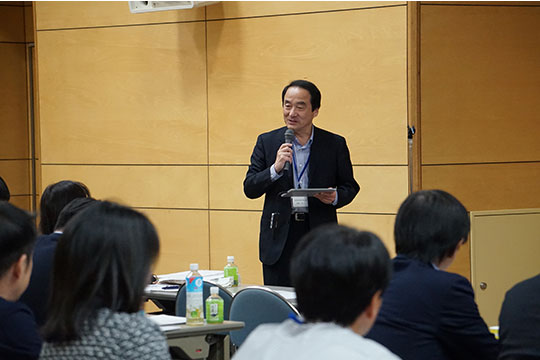 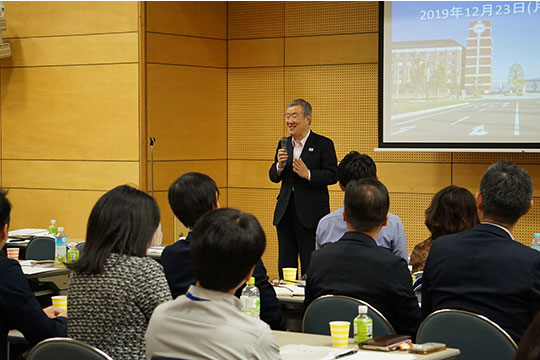 President Deguchi closed the session by giving a talk on the ability to devising a vision for the future.

After the session, the ANA supervisor in charge of the session said, “This was our first time to collaborate with a university on a training program, and I think it was successful precisely because we chose to partner with APU. Our employees were truly inspired by the students’ knowledge, thought processes, proactive nature, and presentation skills. These students are even younger than our subordinates, but we were able to learn a great deal from them.”