On September 21, 2019, a gala to mark the 20th anniversary of the founding of the APU Volleyball Club was held at a hotel in Beppu City. The club was founded in 2000, the same year that the university opened. At the gala, approximately 50 attendees came together in Beppu City from all over Japan, from first-term club members to current members, and even club counselors from over the years. Attendees engaged in nostalgic banter, discussed the future and otherwise talked about a variety of topics, lending liveliness to the proceedings.

Mr. Sumimasa Ikebe, who has served as coach of the APU Volleyball Club over the 20-year period since its inception, expressed how deeply moved he was, saying “Without the energy of the alumni members of the APU Volleyball Club and the energy of its current members, we would have never been able to celebrate the club’s 20th anniversary.” Such expressions of gratitude among attendees enveloped the venue in feelings of warmth.

There are around 100 clubs and circles at APU, from those associated with sports and literary arts to those involving academics and volunteer work. The Volleyball Club has a healthy membership of both domestic and international students who energetically practice and play at the gymnasium on campus. Expectations are that the club will continue being just as active going forward, adding to its already-lengthy record of ongoing activities. 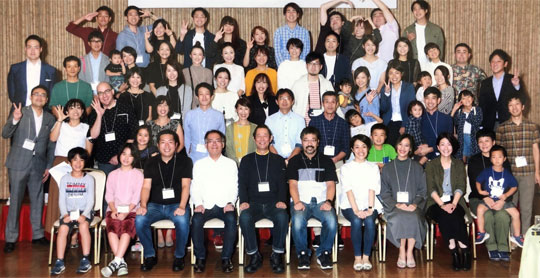