A special ceremony was held on February 6th, 2007 for two interns from Nippon Light Metal Company, Ltd., SHIRAKI Hironori and TOMOBUCHI Masaki, who completed the requirements of APU's MBA Special Program. The two interns had attended APU as non-degree students from September 2006.APU President Monte CASSIM and Dean NANBA of the Graduate School of Management said a few words of congratulations. They encouraged the interns to take what they had learned in their studies of Technology Management, Innovation, and Accounting and Human Resources Management to become future leaders within the Japanese manufacturing industry. The interns were also encouraged to reflect on their time in the international environment of APU and how that impacted their studies.

The speeches were then followed by a presentation of certificates. In reflecting on the program, both interns expressed that it was challenging being the only Japanese students in their classes, but it was a valuable experience for them spending time with and learning alongside students of such high motivation and ability from all around the world. Both students stated they have a great deal of pride in their accomplishments, and that they are looking forward to set out into the business world. 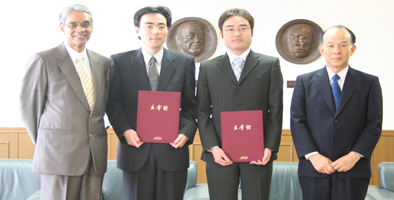