This conference was designed to encourage collaborative research and dialogue on the changing configurations of international power and influence in the Pacific Islands region. Co-sponsored by the Institute of International Strategic Studies, Ritsumeikan Asia Pacific University and the Center for Pacific Islands Studies, School of Hawaiian, Asian and Pacific Studies, University of Hawai`i at Manoa, this conference considered the increasingly important political, economic, and social connections between China and the small island states of Oceania.
China in Oceania focused on the emerging role of Beijing, which appears committed to become an important actor in the Pacific Islands region. This development is being closely watched by the western powers most actively involved in Oceania, Australia, New Zealand, and members of the European Union, as well as by Japan which has established a significant regional presence over the last two decades. Also paying close attention to China's new assertiveness is Taiwan, which has attempted to further its quest for international recognition using high-stakes "dollar diplomacy" towards the small island nations. These developments mark a shift in the regional balance of power perhaps as significant as any since the establishment of European colonies two centuries ago.

The conference brought together international diplomats, scholars and graduate students to consider this shift in regional dynamics and to analyze its implications for the needs and aspirations of the twenty-two Pacific Island nations and territories that comprise this oceanic realm. Some of the topics covered included the China-Taiwan competition in Oceania, the Japanese view of the issues, as well as specific country focused discussions of China's and Taiwan's roles in Oceania. The keynote address was presented by Ambassador Michael Maue, Papua New Guinea ambassador to Japan. Other speakers included former New Zealand ambassador to China and the United Nations, Mr. Michael Powles and Professor Zhang Yongjin from the University of Auckland.


Following the completion of the conference, a plenary session was held to discuss future activities and direction of the project. During this plenary the following suggestions were made:
1. Provide results of this conference to Pacific leaders, as well as scholars and students.
2. Focus future activities on the view from the Pacific and not only from outside the region. Clarify diversity found within the Pacific on their history, culture, current needs and policies.
3. Bring national leaders into this discussion, sharing up to date data and views of scholars and government officials.
4. Study the role of Asian immigrants in the Pacific to gauge the view of Asian countries by native people through their experiences with immigrants.
5. Explore comparative study with China's initiatives in Africa and Oceania.
6. Publish a volume as quickly as possible from the conference proceedings. 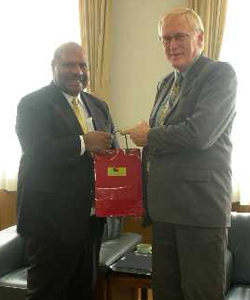