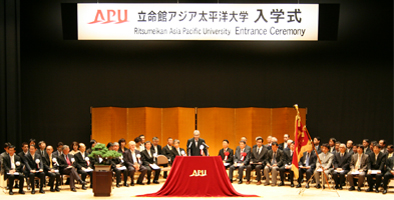 The ceremony commenced with a welcoming address from APU President, Mr. Monte CASSIM who said, "Making the effort to find common ground and understanding customs will be part of the daily challenges of multicultural campus life at APU. To our overseas students far from home, while getting accustomed to life in Japan, please draw from the richness of its society and culture."

This was later followed by a welcome speech on behalf of current APU students given by Mr. TERAI Koji (APM3, Japan). Then, on behalf of the new undergraduate students, Ms. LI Zhiyi (APS, China) and Mr. KHOO Boon Liang (GSA-APS, Singapore) spoke of their hopes and aspirations, "The conflict and blending of cultures will widen our vision and improve our thinking. We are the future of our own countries as well as that of the world, and we gather here at APU in pursuit of goals common to all mankind."

As a finale to the Entrance Ceremony, current students held a few short performances in order to introduce the various Circles and Societies at APU, and the Millennium Hall came alive as the audience enjoyed the enthusiastic performances. 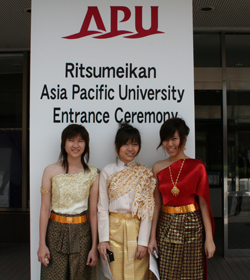