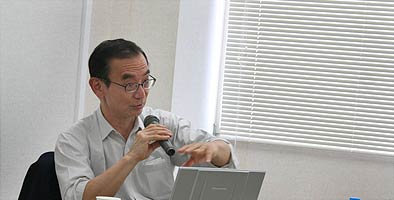 Approximately 30 students and faculty attended the lecture. Ambassador YAMAZAKI started the lecture by introducing the structure of the FTA (Free Trade Agreement) and the EPA (Economic Partnership Agreement). He then went on to talk about the situation of Japan's Free Trade Agreements and the criterion that must be met before an agreement is concluded. Ambassador YAMAZAKI made the comment that "before an FTA can be concluded a lot of factors, such as the politics of the current ruling parties and their attitudes towards industry, must be taken into consideration. It is very difficult to work towards an agreement when there are differences of opinion between the agricultural industry and secondary and tertiary industries.

Students could be seen taking notes and nodding in agreement as they listened with great interest to one of Japan's leaders in foreign diplomacy. The lecture was attended by a large number of international students, who utilized the question and answer time to put forward questions such as 'I am concerned that by concluding Free Trade Agreements with industrialized nations, developing nations like Indonesia, where I am from, will suffer economically' and 'I would like to know how the Japanese government regards its bilateral relationship with Vietnam.' Ambassador YAMAZAKI took the time to answer each question thoroughly.

Ambassador YAMAZAKI joined the Ministry of Foreign Affairs in 1967. He has served in a variety of important government posts, including Deputy Permanent Representative to the United Nations, MOFA Spokesman, and Ambassador Extraordinary and Plenipotentiary for International Trade and Economy. Ambassador Yamazaki negotiates on behalf of the Japanese government and represented Japan at the 2002 WTO Doha Round and also at the Japan-Mexico Economic Partnership Agreement Negotiations in 2004. He started his current position in October 2007.

In addition to giving the lecture, Ambassador Yamazaki also took a tour of the APU campus and met with President CASSIM. In efforts to help students broaden their perspectives and enhance their career path choices, APU works hard to give its students the opportunity to attend a variety of lectures by people at the forefront of their chosen fields both within Japan and abroad. 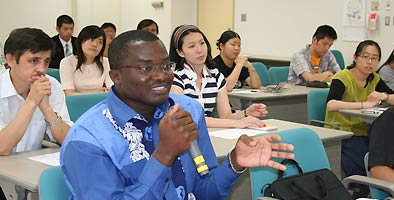