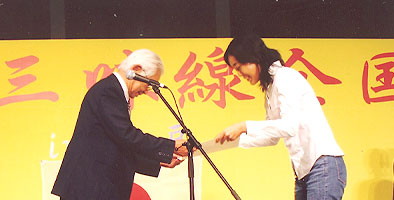 The National Tsugaru-Jamisen Competition in KOBE began in 2004 to mark the 10th year since the Great Hanshin Earthquake and is currently in its 5th year. Top level performers come to appear at the competition from around the country. Furthermore, out of the many national competitions it is the only one to receive the backing of the Ministry of Education, Culture, Sports, Science and Technology.

Ms. SUZUKI has been performing at the competition for 4 straight years since its 2nd year and has an impressive record winning the Governor of Hyogo Prefecture Prize for second place at the past 3 competitions. This time she won the prestigious Minister of Education, Culture, Sports, Science and Technology Prize for 1st place. Ms. SUZUKI spoke of her happiness at receiving the prize "I am so happy to win this prize which I have longed for. There were times when it was difficult to strike a balance with my studies but thanks to all the support I received from many people I was able to persevere. I hope to find encouragement through this to further improve my 'skills' and 'mind'."

Ms. SUZUKI hails from Aichi Prefecture and began playing the Tsugaru-Jamisen from the age of 10. Since entering APU she has been giving lively performances both within Oita and outside the prefecture starting with the Beppu Argerich Music Festival held every year in spring - as well as at the National Tsugaru-Jamisen Competition.
On Saturday November 22, she will appear live on the TOS TV OITA "Hello Oita"(9:55 start) program to announce her victory. Also, on Saturday March 2009, a solo concert is planned to be held at the Beppu Community Center.
We are expecting great things in her future activities. 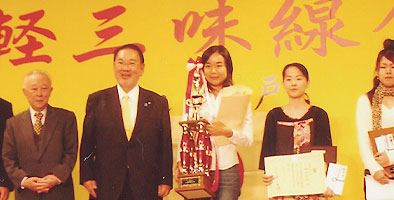