From Thursday November 27, 2008, until Friday December 5, the APU Student Volunteer Circle PRENGO held the PRENGO WORLD AIDS DAY aiming to raise peoples understanding and awareness of AIDS/HIV
This event, now in its 5th year, used the 2nd floor of the Student Building as the site of their exhibition and had materials relating to AIDS/HIV seeking understanding. They also distributed red ribbons –the symbol of AIDS DAY –to students at the Cafeteria and collected messages.
During this event they collected 129 red ribbons and 85 people came to view their exhibition.

Looking back on WORLD AIDS DAY, PRENGO representative UEDA Yuito (APS2, Japan) said, "According to a release from the Ministry of Health, Labor and Welfare, Japan is the only developing country with a rising rate of AIDS infections. Also in Thailand, an area that we, PRENGO support, there were people infected with HIV and children who had lost their parents to AIDS. We don't want people to think that AIDS/HIV is something that has got nothing to do with them. AIDS/HIV is in our immediate surroundings and "awareness" is the first step towards lowering the rate of infection and removing discrimination. I want to continue awareness campaigns so that even just one more person can deepen their understanding of AIDS/HIV.

PRENGO was established in 2000 and is an APU premier volunteer circle. They are involved in volunteer activities in Rayong Province, in the Kingdom of Thailand, and center their activities on the three areas of economic support, public health support, and educational support. They also hold photo exhibitions on campus to improve people's awareness. In February 2009 they will travel to Thailand for the 11th time and carryout support activities. During this time they plan to visit AIDS facilities. 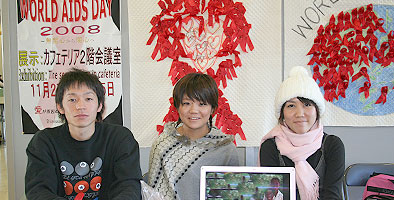