The Japan University Rankings 2020, which began in 2017 and are published by British higher education journal The Times Higher Education (THE), were released on March 24.

Of the 278 schools surveyed, APU was the highest ranked private university in western Japan for the third year in a row and placed in the top five among the nation’s private universities. Overall, APU ranked 21st nationwide (up from 27th last year).

The ranking consists of four categories: Resources, Engagement, Outcomes, and Environment. APU ranked fourth in Japan (2019: 5th place) in Engagement, which is based on a student survey and a reputation survey with high school teachers, and second in Environment (2019: 3rd place). Meanwhile, APU’s rank in the Outcomes category, which includes an appraisal by HR departments of several companies, jumped from 77th place last year to 44th, which reveals the strong reputation our graduates have earned among their employers.

While most world rankings focus on research capacity, the THE Japan University Rankings are designed to measure teaching capacity by placing more emphasis on student growth and learning.

In October, the UK-based Quacquarelli Symonds (QS) published its yearly ranking of universities in the Asia region.

The Asia edition of the QS World University Rankings listed more than 400 universities. In the categories of International Faculty (percentage of faculty from outside the country) and International Students (ratio of international to domestic students), APU received a full 100 points out of 100 possible.

This year, APU was the only Japanese university to receive a perfect score in the International Faculty and International Students categories in the Asia rankings. According to QS, APU ranks within the top 2.5% of universities in Asia overall.

In November, UK-based Quacquarelli Symonds (QS) released its annual Global MBA Rankings for 2018. APU appears in the top 30 of the list of MBA programs in Asia, Australia, and New Zealand. Only three other Japanese universities placed in the top 30: Waseda Business School, Doshisha Business School, and Nagoya University of Commerce and Business.

In 2016, the Graduate School of Management received accreditation from The Association to Advance Collegiate Schools of Business (AACSB), joining a global body of high quality institutions that adhere to a strict international standard of business education. Students in the Graduate School of Management (and undergraduate students in the College of International Management) also have the opportunity to join Beta Gamma Sigma, the honors society for top students at AACSB-accredited schools.

Paris-based Eduniversal placed the Graduate School of Management’s MBA in the top 20 of International Management programs in the region of Far East Asia for 2018.

For more details, click the link below.
http://www.best-masters.com/ranking-master-international-management-in-far-eastern-asia.html?filtre-pays=Japan
(link to external site)

Asahi Shimbun Publications has released its AERA Shingaku MOOK (Weekly Magazine Asahi University Guide Magazine Book) 2020 University Rankings, which evaluate 777 of Japan's universities from a variety of different perspectives. Below are the main categories in which APU was highly evaluated. 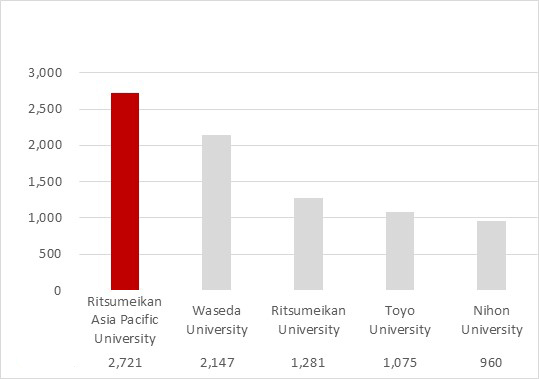 International students as a percent of total undergraduate population1,2 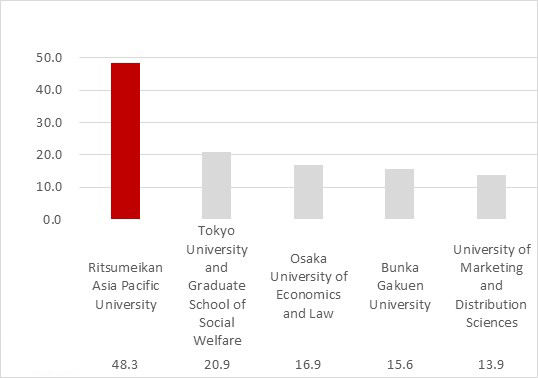 International faculty members as a percentage of total faculty population

(Among universities with 3,000 students or more) 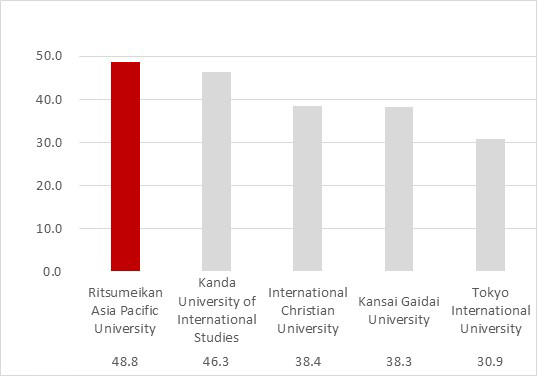 Notes:
1. Regular full-time international students.
Does not include auditing students, research students, or exchange students.
2. For universities of 2,500 students or more.