On Saturday, November 13, 2008, The Ritsumeikan Asia Pacific University Wind Orchestra held their Annual Concert at the APU Millennium Hall.The Annual Concert, now in its 6th year, was held under the theme of "Everybody needs Music" and consisted of 2 halves. The first half featured classical pieces such as "The Inn of 6th Happiness" that members of the group felt would appeal to those who have had little experience of wind orchestras. In the second half, songs from a range on genres were performed such as Joe HISAISHI and Disney animation themes, pop and jazz pieces. During the performance the orchestra was inventive with its part introductions and ensemble performances which enthralled the crowd.

The APU Wind Orchestra was established in 2002 and currently has 60 members including 10 international students. This year the orchestra won gold at the Oita Prefecture Wind Orchestra Competition and represented Oita Prefecture at the Kyushu Wind Orchestra Competition. Furthermore, the orchestra has performed on-campus at events such as the "Tenku" Festival and the Welcome Concert. Off-campus they have also given a concert outside JR Beppu Station, performed at opening events for the Beppu-Bay Service Area and Centleisure Kijima Kogen Park and are expanding their range of activities. 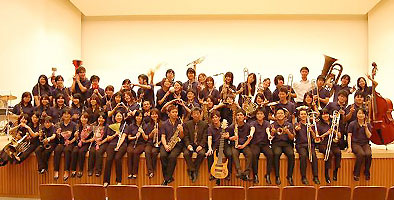