The All-Nippon Sumo Championships were held at Usa City on 3 May 2005. APU organised a Ritsumeikan University Sumo Team support tour which was attended by nine international and graduate students from six different countries. 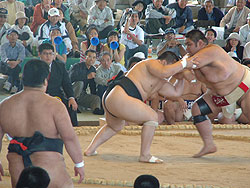 The APU students, who were all watching live sumo wrestling for the first time, cheered on the Ritsumeikan University Sumo Team from the front row before a capacity crowd of 1,600 people. Students were interviewed by Mainichi Shimbun reporters about what their impressions were and had this to say: "Sumo wrestling is amazing; as long as one has the technical ability, even a small wrestler can defeat the larger wrestlers." 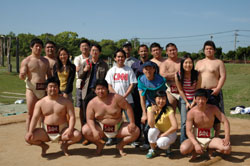 On the way back to APU, the students were taken on a tour of Usa Shinto Shrine - one of Japan's most famous and important shrines. Everyone seemed to have enjoyed themselves experiencing and learning about Japanese culture.