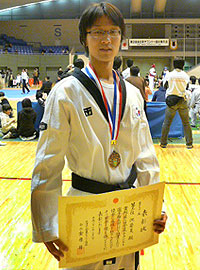 As expected, Mr. JI advanced well in the tournament and faced off against ex-Japanese representative Kiyoteru HIGUCHI who represented Japan at the Sydney Olympics. Unfortunately he has narrowly defeated 5:3 and placed 3rd.

After the bout, Mr. JI spoke of winning the bronze medal and his future ambitions, "Being able to face off with and post good results against world-level athletes was a great experience. I will especially remember my semi-final bout against Kiyoteru HIGUCHI. I hope to carry on from this match and post a good result at the All-Japan Tae Kwon-do Tournament next year."

The APU Tae Kwon Do Circle was established in 2000 and is made up of students from over 10 countries and regions such as Korea, Japan, Mexico and Canada. The male and female members go through rigorous training twice a week. The circle has gained some very good results in AY2008 and also performed at the Korean Week and "Tenku" Campus Festival. 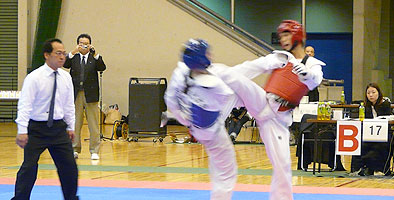