On Friday, April 10, 2009, a signing ceremony was held at the Oita Prefectural Office to conclude the Friendship and Exchange Agreement between APU and Kitsuki City. Kitsuki City –with is Edo Period castle town flavor, history and culture –and APU –which aims to nurture global human resources as an international education and research institution –will, through this exchange agreement, attempt to further strengthen their relationship. 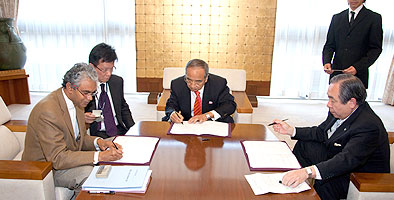 Present at the signing ceremony from Kitsuki City was Mayor YASAKA Kyosuke, and APU President Monte CASSIM who signed the agreement along with Governor of Oita Prefecture HIROSE Katsusada who acted as official witness.

Mayor YASAKA spoke of his expectations, "We already have developed links with APU and APU students have participated in our 'Yamaga Furusato Festival' for example. It is a great pleasure for the region when students and locals work and strive together in such initiatives and deepen their exchanges. In the future we hope to utilize in our administration the wisdom and results of the university's knowledge in the academia, international and research fields."

President CASSIM spoke of his hopes for the exchange agreement, "I hope to engage with the City of Kitsuki in programs through which we can utilize the miniature environment, academic resources and results of APU. Kitsuki is a beautiful town which has kept its old-style street façade and is pouring its efforts into tourism. We at APU wish to provide our assistance in a range of areas related to tourism, energy, food and health etc, which we hope will lead to the development of Kitsuki city."

Kitsuki City is situated in the southern part of the Kunisaki Peninsular in north-east Oita Prefecture and has a population of approximately 34,000. It has a flourishing agricultural sector and is blessed with boundless nature with a beautiful coastline on the one side and surrounded by mountains on the other. Furthermore, people are fond of Kitsuki as a tourist spot for its Kitsuki Castle and old street façades such as the old samurai residences. 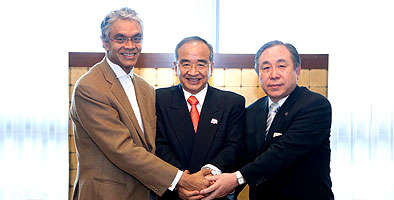