On Wednesday, April 29th, 11 students that participated in fieldwork in Dalian, China from February 22nd - March 1st presented the findings on their research. The theme of their field study trip was "Latest Trends and Issues in China's Globalizing Economy—Japanese Companies and Economic Development in the Dalian Region". 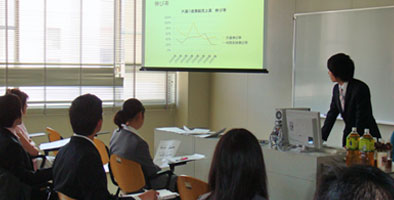 This field study is a regular curriculum subject offered as part of APU's Global Active Learning Program. Each time it is offered, an APU faculty member-led group of students conducts an overseas filed study based on a different theme. This program commenced in 2006, and since then over 500 students have participated. This year was the first time for a China-based field study, and participating students visited Dalian and Beijing.

AOSHIMA Yuki (APM3, Japan) gave a presentation entitled "Japanese that Trust Too Much and Chinese that Trust Too Little: What is Necessary for Japan-China Business Relation". She noted that Japanese people tend to trust people and products too much without making judgments or taking action on their own accord, while Chinese people tend to make judgments and decisions based on their own beliefs. She cited an example of what he noticed on his visit to China. "In Japan, consumers will select products or sets of products recommended by the store and pay the listed price without assessing whether it's appropriate or not. If you consider traffic rules, the Japanese always stop at red lights. On the other hand, the Chinese only buy products that they have checked over and think are worth buying, then they negotiate the price. As for traffic rules, they take safety into their own hands without relying on signals." She added, "What is needed for China-Japan relations, business and otherwise, is not a judgment on whose culture or customs are good or bad, but a mutual recognition of differences. How much you can understand where the other side is coming from is important."

TECHARTIPAKORN C. (APM3, Thailand) gave a presentation entitled "Dalian: Why is it an attractive region for Japanese corporate investment?" He reported, “The government has created the conditions and policies that make it easy for foreign companies to enter Dalian. Not to mention personnel expenses are lower than Shanghai and Beijing and infrastructure such as airports and railways are in place."
TECHARTIPAKORN expressed his feelings on the visit. "On this field study I learned that Dalian is a city with a lively economy that proactively accepts other cultures and peoples. In the future I want to start a trading house that links Japan, China and Thailand, so I think it was a rewarding experience to learn about trade relations between Japan and China."

The city of Dalian serves as the economic epicenter of China's northeastern region. Home to many Japanese companies and subsidiaries, Dalian is also a model region for Japan-China economic trade and cultural exchange. Before departing, students studied about Dalian's economy and society as well as the lifestyles of its citizen. By visiting and interacting with global companies and organizations in Dalian, students gained an understating of the Chinese people and their culture, which was one aim of the program along with gaining an understanding of 1) the current situation and issues surrounding economic development in China's coastal region, 2) Japan-China cooperation in Dalian and 3) the importance of business cooperation in northeast Asia. This program is also intended to change students' perceptions on the lifestyles of the Chinese people, to foster their interest in Chinese culture, to expand their global horizons and sharpen their global awareness.
Another field study in China is slated for this summer. 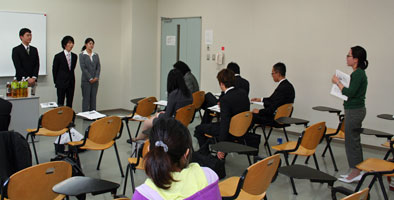