On Monday May 18, twenty three university executives from ANHUI province visited APU as part of the Special Research Seminar for Administrative Staff from Chinese Universities by the Ritsumeikan Trust. 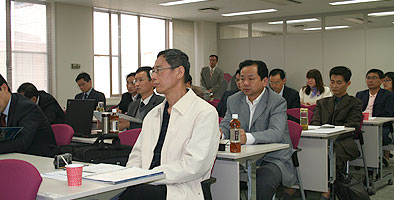 The group will be in Japan for about 20 days from May 10 and will learn about university administration policy, education programs and student support systems predominately at the Ritsumeikan University Kinugasa Campus. While they are here, they will also undertake JICA research and fieldwork looking at Japanese history and culture as well as receive lectures at APU and other universities. They hope to utilize these experiences in their own universities in China.

A lecture was given by Deputy Director of University Administration and Student Services KIDA under the theme of "The Internationalization of Higher Education". The participants were seen to be listening attentively to the unique APU education programs in which international students from around the world learn. In the afternoon they split into 3 groups and then, guided by international students from China, enjoyed a tour of the APU campus in which they visited such "learning places" as the Media Center, Library, a variety of class rooms and AP House. Some of the groups were able to observe and receive the hospitality of a tea ceremony at the Japanese Tea House "Washinan". 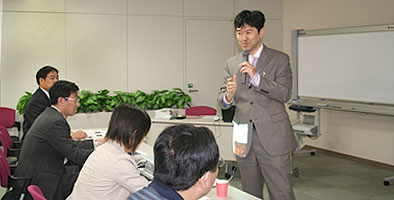