On Saturday, July 4, 2009, the Japan-Taiwan Goodwill Association of Oita Prefecture General Meeting and Conference was held in Beppu City to mark its 30th anniversary. One hundred Taiwanese university students studying in Oita prefecture were invited to attend including 55 from APU.
The Japan-Taiwan Goodwill Association of Oita is an organisation made up of Oita members and aims to promote the improvement of friendly ties between Japan and Taiwan. The meeting was attended by such important figures as FONG JI Tai of the Taipei Economic and Culture Representative Office, CHOU Shou Ying of the Taipei Economic and Culture Representative Office in Fukuoka, HUANG Tien Lin of the Taiwan-Japan Economic and Cultural Representative Office, Director of the Japan-Taiwan Goodwill Association OKAZAWA Kazuo, Member of the House of Representatives IWAYA Takeshi and Mayor of Beppu City HAMADA Hiroshi who all came to celebrate the association's 30th anniversary. APM 2nd year student YU Chi-Hsuan gave a few words of greeting. During the conference APU students sang songs in groups of 4 and performed dances in groups of 10 which received a hearty applause from the audience.

One of the APU students SHEN Jui-An (APM3, Taiwan) who attended the meeting and gave a performance spoke of her aspirations for the future, "The Japan-Taiwan Goodwill Association aims to promote interpersonal exchange between Oita Prefecture and Taiwan and it is an honor to be able to perform at their 30th anniversary. I hope to continue my efforts to make the culture of Taiwan known in Oita Prefecture. I also hope to cooperate with the Taiwanese students studying in the Prefecture to hold exchange activities and events." 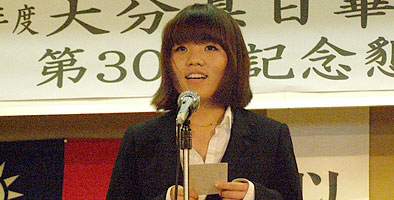