On Thursday, July 16, 2009, the 7th "Indonesian Drama" was held at the Multipurpose Hall. The Indonesian Drama is a semi annual event held at APU as part of the Malay/Indonesian language course. This project aims to provide students with an opportunity to put into practice what they have learnt in class and to strengthen their friendships. 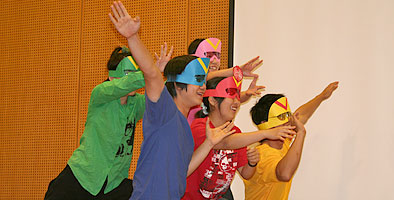 This semester approximately 20 students taking the Malay/Indonesian 1 language course and several Indonesian students took part in the drama. The performers were divided into 5 teams and each performed dramas under different themes such as "Lima Ranger" (Five Rangers) and "Ada Apa dengan si Kribo" (What's going on with Mr. Kribo). Each performance was delivered entirely in Indonesian and proved most popular with the audience. Before the event came to an end, Junior Lecturer and person in charge of the Malay/Indonesian class, Ms. IRA DIANARTATI Soemantri announced the best actor and best group performance. 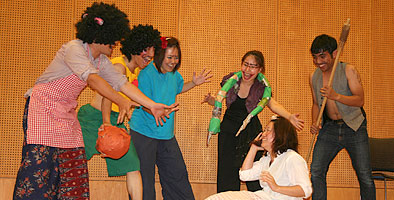 At the conclusion of the event, person in charge of this program, APS Associate Professor IGUCHI Yufu gave her comments on the performance,"I am very happy today because the drama was such a success. Its quality has been improving each semester and I think this event is truly one of the real images of APU as a university with an international community."

LO Wei Chen (APM5, Taiwan) commented on the performance,"This drama has greatly motivated me to join the Malay/Indonesian class as I believe this event provides us with a wonderful opportunity to create new friendships with APU students from different countries/regions and people from Indonesia". 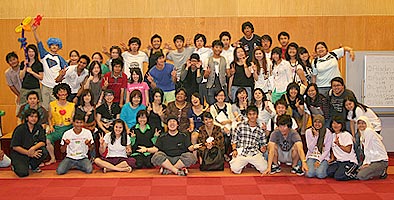