On June 6 and 7, APU received delegates from the College of Foreign Languages, Shanghai University. 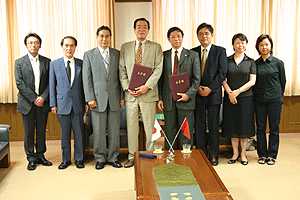 After being welcomed by APU Vice President Hayashi and other APU Executives and receiving a tour of the campus, the delegates participated in a ceremony to mark the signing of a student recommendation agreement between the College and APU. Under the agreement, the college will recommend students for admission to APU's undergraduate and graduate programs. It is expected that this agreement will assist APU in enrolling more talented students from the Shanghai area. It was also agreed that the signing of the agreement should be used as a catalyst for further exchange and cooperation between Shanghai University and APU in a variety of areas in the future.