Starting with familiar Japanese autumn songs such as "Autumn Leaves" and "Autumn Child", the concert showed the unique international flavor of APU with a range of performances including "If you're happy and you know it, clap your hands" sung in 5 different Asian languages, a Thai dance performance by Thai international students, and a counting song featuring 6 different languages. They followed this up with a Korean song for their encore. They also performed "Become the wind" and "Carrying You", songs from the Studio Ghibli animated films "The Cat Returns" and "LAPUTA: Castle in the Sky". The audience sang together "furusato" and appeared to really enjoy the concert infused with instruments such as the ukulele, ocarina and recorder.

Looking back on the performance, one of the participants, DAO Thuy Duong (APM2, Vietnam) spoke of her aspirations for the future, "We felt close to the audience and were able to put on a peaceful and enjoyable concert. We also received concert requests from the audience and executive committee members of previous community events we have participated in also came along. We received a lot of support from the community and I really felt that our scope of events is expanding. I hope to continue such community based events in the future."

*The Community Café
The Community Café provides a place for a range of exchange events overcoming gender, age, disability and culture, and is gaining increasing attention as a means to develop the local community with an emphasis on health and well being. 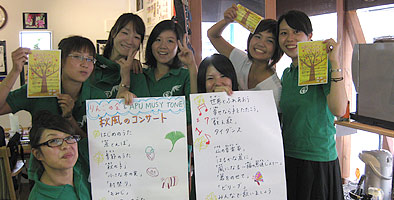