On Friday, January 22, 2010, the APU Health, Environment and Health Science Institute (HEALS)* welcomed Hiroshima University, School of Biosphere Science Associate Professor, Takeshi NAGANUMA PhD as guest speaker who delivered a special lecture entitled "Human Dimensions in the Universe and the Biosphere". Convened by Former APU President Monte CASSIM, this special lecture looked at life systems at the bottom of the ocean, the Deep Subsurface Biosphere, and the possibility of life on other planets. 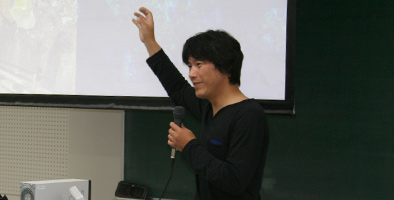 Professor CASSIM framed the context of Dr. NAGANUMA's lecture for the HEALS students. With current high levels of human consumption of energy and material resources, he observed that researchers like Dr. NAGANUMA were questioning whether the anthroposphere (human biosphere) should be confined within the bio-geochemical system boundaries of the Earth. The expansion of human outreach beyond the Earth would involve new challenges for coexistence, possibly with extraterrestrial life which might be quite unlike life forms currently known on Earth. In this regard, he observed, Dr. NAGANUMA's work on life in the Deep Surface Biosphere ・a harsh environment uninhabitable to humans ・might offer us hints in trying to understand the nature of extraterrestrial life.

Dr. NAGANUMA first described tube-worms ・a curious deep-sea creature found across the Pacific Ocean floor around deep-sea hydrothermal vents that has no mouth, no gut, eats nothing, and relies not on sun-light, but on nutrition produced by symbiotic bacteria to live. Challenging the conventional definitions of "animal" the tube-worms also drew scientists' attention to the potential of life deep in the earth's crust ・the so-called "Deep Subsurface Biosphere" and source of the microbes that provide the tube-worms nutrition.

Dr. NAGANUMA then turned his attention to the potential of similar life on other planets in the solar system, in particular Jupiter's moon, Europa. With its potential for liquid water oceans and geothermal activity beneath its icy crust, Dr. NAGANUMA suggested that life-forms, including tube-worms, could be present in Europa's seas and Deep Subsurface Biosphere.

At the end of the lecture, many students raised some interesting questions such as the potential for life on the Moon in light of the recent discovery of rock-embedded water there. Dr. NAGANUMA suggested that, "if a life form lived sufficiently deep enough in the Moon's surface to protect it from the sun's radiation and had the ability to access the rock-embedded water, then such life on the Moon could potentially exist". 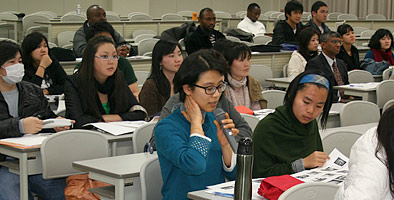