On Saturday, September 18 and Sunday 19, 2010, the APU Baseball Team faced-off against the Oita University Baseball Team for two Oita Region Autumn League matches. With two wins from two, the team secured second spot in the Oita League and booked its place at the upcoming All-Kyushu College Baseball Tournament. 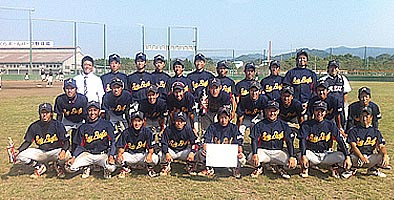 Representative of the APU Baseball Team, KITANO Daichi (APM3, Japan), spoke of the team's goals for the future, "we will go up against some very strong teams, each a veteran in their own league, but I hope that team will come together well and post as many wins as we can. So please get behind your team!"

Two teams from each prefecture will appear in the All-Kyushu College Baseball Tournament. Held from Monday, October 4 until Friday, October 8, the tournament will be held across to venues in Kitakyushu. The APU Baseball Team will have their first match on the 4th. We hope you will come out and support the team and enjoy a fine autumn day of sport!