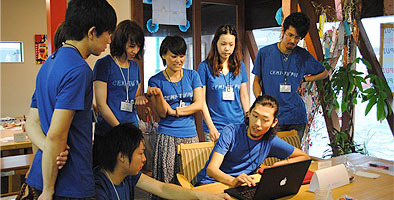 The City Invigoration Plan Project is a Prefectural initiative to subsidize event ideas and support their commercialization in an effort to boost the appeal of local shopping districts and increase their ability to attract customers. There were 27 applications this year. Five groups in the student division and five groups in the general division moved on to the final screening, and after public presentations, two groups from each division were awarded prizes as the first step toward launching projects within the fiscal year.

cemi-tu' pui, winner of the Grand Prize in the student division, presented its "APU Downtown Festival 2010" as a means to reinvigorate the region and promote exchange between students and local residents. The aim of their plan is to create an off-campus school festival featuring APU-esque performances and food booths with an international twist.

IEIRI Kensei, cemi-tu' pui leader, explained his motivation by saying, "To hold an off-campus event will require the understanding and cooperation of the local citizens, and I think there will many hurdles we have to overcome. We want to work together to create an event that breathes some life back into Beppu's shopping districts."

APU Downtown Festival 2010 is scheduled to be held primarily in the shopping districts of Nagarekawa, Beppu Ekimae and Sol Paseo Street from Monday, January 17th until Sunday, January 23rd, 2011. A preliminary publicity event will be held on Sunday, November 21st at the Forever Beppu Theater in downtown Beppu as part of Beppu Art Month 2010. The event will feature Korean drumming by the APU samulnori team, Shinmyong, and a tropical salsa performance as well as a photo exhibit of APU student performances to date. Everyone is more than welcome to attend!!

cemi-tu' pui is also looking for students who want to get involved in this event. If you are interested, please contact cemi-tu' pui.
cemitupui@gmail.com