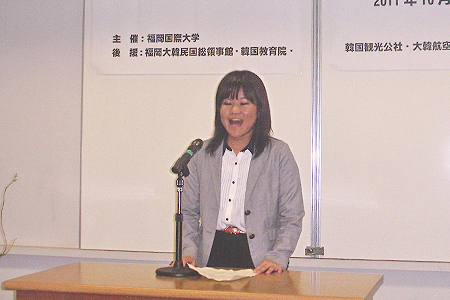 Held to support Korean language education and promote Japan-Korea exchange, the Korean Speech Contest began in 2008 and is open to high school and university students in the Kyushu/Yamaguchi area for whom Korean is not their native language and who have not lived in Korea for more than 12 months.

Grand Prize winner, KIRIIKE Kaori, delivered a speech entitled “Exchange, starting with food” and introduced episodes from her encounters with Korean friends and the differences between the Korean and Japanese food cultures.

Kaori commented on her success, “In preparation for this event, I always tried to keep my audience in mind and practiced my pronunciation and intonation so that the audience would see my enthusiasm. I began studying Korean as a first year student, so winning this prize makes me feel as though all that hard work has paid off. I wish to express my gratitude to the support and instruction of my teachers and friends, and hope to continue improving my Korean language skills in the future”.

Home to students from 78 countries and regions (as of November 1, 2011), Asia Pacific language education continues to play an important role at APU. The Korean language classes continue to be very popular and the university also provides opportunities for students to study the language in Korea through language immersion and field study programs. 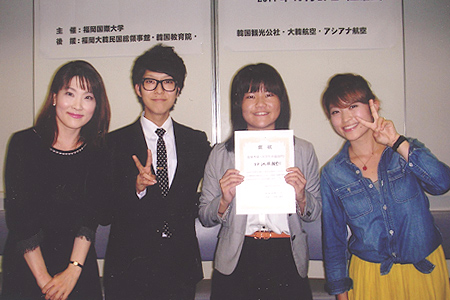