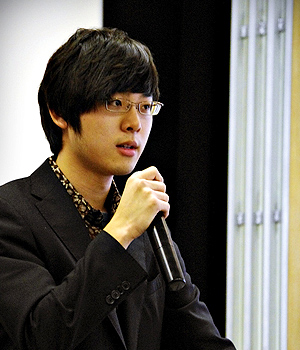 First-prize winner, ENDO Takaki, compared the recovering efforts in Sumatra - a region recovering from a state of conflict - and in Tohoku - a region suffering from a shrinking population and industrial sector. Mr. ENDO spoke of how he spent many hours practicing while paying special attention to the unique Indonesian intonation and rhythm.

Looking back on the event, Mr. ENDO said, “Having begun studying Indonesian a year ago, I’m so happy to have been able to achieve this prize. Taking part in this contest has motivated me to learn more about the Indonesian culture”. Mr. ENDO also delivered his speech at the Indonesia Culture Day, held on the same day as the contest. A group of APU volunteers also attended the event and gave a stage performance of the traditional Indonesian ‘Saman’ dance.

The APU campus is home to a diversity of students from countries and regions around the world. APU continues to provide students with the opportunity to develop advanced language proficiency skills by offering beginner, intermediate and advanced classes in six of the major Asia Pacific languages, namely, Chinese, Korean, Malay/Indonesian, Spanish, Thai and Vietnamese. Students are therefore able to make the most of the APU multicultural environment and engage in language study both inside and outside the classroom.