On Thursday December 1 and Friday December 2, 2011 APU and S.Rajaratnam School of International Studies (RSIS), Nanyang Technological University(NTU), Singapore jointly held an international academic conference “Engaging the United States:Asia-Pacific Responses.”
Many participants from the diplomatic, scholarly and journalism communities attended the conference to discuss issues related to the conference theme from the perspective of countries in the region. 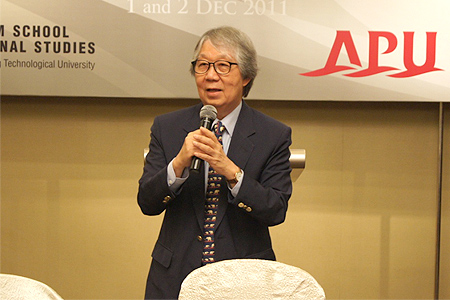 In the keynote speech, Tommy Koh, Ambassador-at-Large Singapore and APU’s Academic Advisor mentioned that the US is a Pacific power, will accord Asia a higher priority than other regions shifting from the West, will increase further economic and military engagement in the region, will use the TPP as the primary vehicle to promote free economic activities in the region, and has elevated the importance of ASEAN, including recent efforts in Myanmar.  He also expressed clearly that the US relationship with China is not a hostile one and the two powers could co-exist and that ASEAN and India maintain a neutral stance between the US and China. 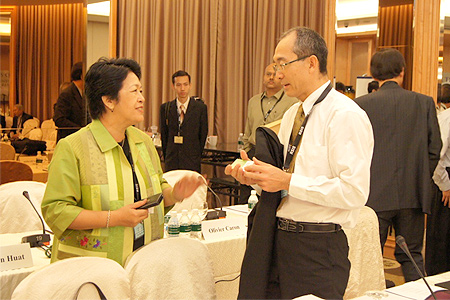 Further to the keynote speech, vigorous discussions on the US commitments to Asia, especially ASEAN, issues around rapid growing China and India and its relations were conducted between experienced and knowledgeable participants.
The delegation from APU, President Korenaga Shun, Pro Vice-President PORTER Edgar A, Vice-President A.Mani, Professor Sato Yoichi, Professor Yoshimatsu Hidetaka, Assistant Professor Ching-Chang Chen took part in the discussions as speakers and panelists. 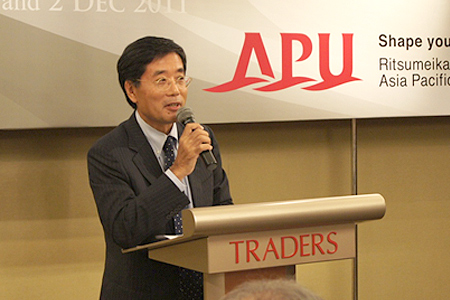 APU looks forward to working with our partners in Singapore and throughout South East Asia. 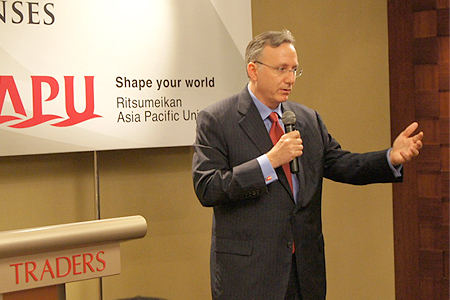 US Ambassador David I. Adelman

The conference was followed the next day by APU’s educational symposium titled “Study in Japan, Work in Asia ~Global HR and Japanese Higher Education~” at Shangri-La Hotel, Singapore.  About 140 people including APU alumni, teachers and students from local schools, business persons have showed up to crowd the venue. 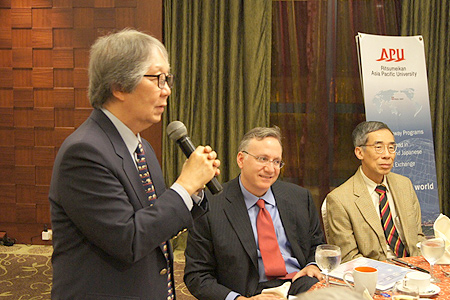