In line with APU's New Challenge Plan, a Ground Breaking Ceremony was carried out for the new buildings to the west-side of the APU Graduate School Buildings on Wednesday, April 19, 2006.

Approximately 90 people including the Vice Governor of Oita Prefecture, Mr. ISHIKAWA Koichi, Vice Mayor of Beppu City, Mr. OTSUKA Toshio, Chairman of the Ritsumeikan Trust, Mr. KAWAMOTO Hachiro, President of Ritsumeikan University, Mr. NAGATA Toyo Omi, APU President Monte CASSIM and various officials from Ritsumeikan Academy and people related to the construction of the buildings attended the ceremony to express their hopes for the safe construction of the new buildings. 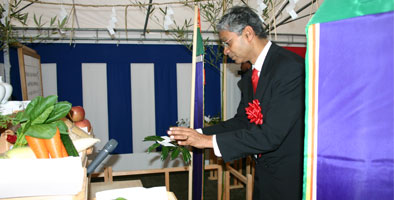 The Chairman of The Ritsumeikan Trust, Mr. KAWAMOTO Hachiro in a short address said, "APU has exceeded the expectations of society since its conception six years ago but its future will be influenced upon the success of its current New Challenge Plan. It is necessary to raise the bar of education and research standards and establish a long-term plan for stability. Let's unite our efforts and truly make the APU an international University."

It is expected that the new classroom building, new research building, student-related facilities and AP House3 will be completed by April 2007. 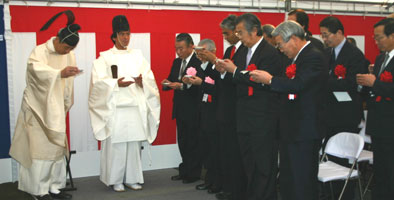