The Agreement of Cooperation and Student Exchange was concluded with the Academy of Management (Mongolia) on November 2, 2006. 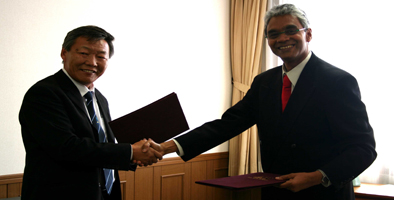 This is the second Mongolian university which APU has established an Agreement of Cooperation with, following Mongolian Technical University. The Agreement of Cooperation was signed by Rector Dr. LKHAGVAA Togooch and President Cassim. Director Bataa Mishigish (international department) from the Academy of Management and Professor Edgar Porter, Director of Institute for International Strategic Studies, from APU, attended the signing ceremony.

In addition to the implementation of student exchange from the next fiscal year, the CAP(Crossover Advanced Program)International Strategic Studies for students was also discussed. Discussions proceeded concerning the "International Politics in Northeast Asia," an Active Learning program which will involve research as well as visiting foreign embassies in Ulaanbaatar, Mongolia.

With the conclusion of this agreement, APU has Student Exchange agreements with 68 universities in 29 countries and regions across the world.