The President of the Czech Republic, His Excellency Vaclav Klaus was presented with an honorary doctorate at a Conferral Ceremony held in his honor at the APU Convention Hall on Friday, February 16th.Ritsumeikan Chancellor Kawaguchi in his address said, "I am confident that this visit to APU by President Klaus, and his acceptance of the Honorary Doctorate, will further deepen exchange between Czech and Japanese higher education institutions, as well as act as a catalyst for cultural and economic exchange between our two countries."

His Excellency Klaus then took to the podium. He expressed it was a personal honor for him to receive the APU Honorary Degree in recognition for his scientific achievements and political career. He stressed that it represented the cordial relations between the Czech Republic and Japan and toasted to building an even stronger relationship.

The formal part of the proceedings was concluded with the presentation of a bouquet of flowers to the President and the First Lady by two APU students of Czech background. One of the students' relative was the late President of the Czechoslovakia government of exile during World War II, Edward Benes. 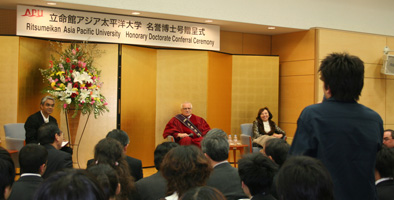 While enjoying a traditional Japanese lunch, the President and First Lady were treated to performances of Czech and Japanese music by the APU Symphony Orchestra. Among the performed pieces were Ma Vlast, traditionally translated as 'My Country' or more literally 'My Fatherland', by the Czech composer Bedrich Smetana, and Ashitaka Sekki (The Tale of Ashitaka) by Joe Hisaishi from the animated film Princess Mononoke. 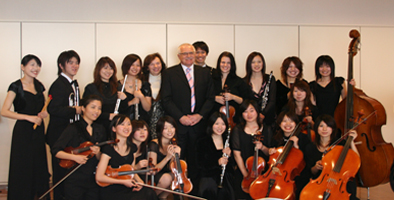