At the meeting with APU President Cassim, the discussion revolved around aiming towards a better education, utilising the assets of both universities in the fields of finance and tourism, and the possibility of collaboration, such as a foreign exchange program, between RMUTR and APU. President Cassim also spoke of his visit to Thailand and the meeting continued in an atmosphere of friendliness.

After China and Korea, APU's third largest category of foreign students hail from Thailand, with 235 Thai students currently studying at the university and many more Thai students planning to embark on their studies at APU in the future. 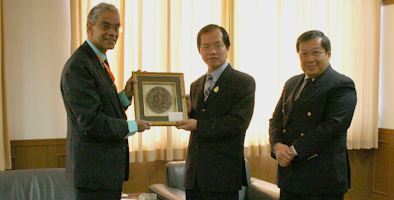