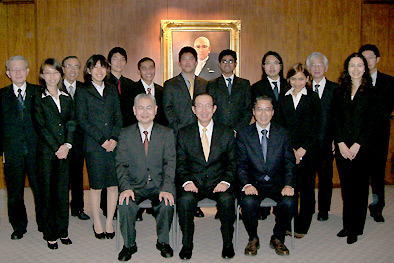 During the visit, the students expressed their thanks to the president of Nissin Food Products Co. Ltd., Mr ANDO Koki for their awards. Mr. Mikeda Perdana Mahdi, a 3rd year student from Indonesia, commented that he wants to show his appreciation for the scholarship by becoming a business leader in Asia in the future. This group also visited the Momofuku Ando Instant Ramen Museum to learn about the invention of instant ramen noodles and tried their own hands at producing instant ramen. 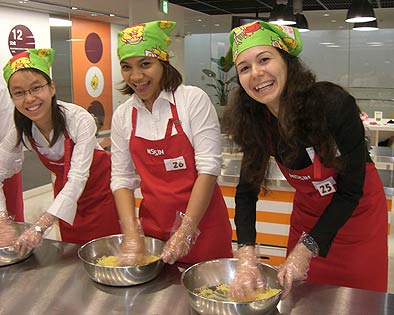 Details on these two scholarships continues below.

The ANDO Momufuku Honor Prize is a scholarship established through the courtesy of the late Honorary Doctor ANDO Momofuku, honorary doctorand founder of Nissin Food Products Co. Limited. This scholarship aims to support undergraduate students who are scheduled to graduate and who have a strong desire to contribute to the Asia Pacific Region in their future careers. Each year one or two APU students are awarded this scholarship.

The ANDO Momufuku Scholarship was also established by the courtesy of the late Doctor ANDO Momofuku. It aims to support students with high academic merit and insightful personalities, who have participated extensively in extracurricular activities and displayed strong leadership skills. Up to four students in their 2nd or 3rd year are awarded this scholarship each year.