On Saturday 19th April, the "2008 PicaPica Welcome Festival" was held as the grand finale to 18 days of welcome events for new APU students. Over 1000 current and new students participated in the festival, welcoming their fellow peers from over 45 different countries and regions.This festival was organized by the "Welcome Committee", an Event Executive Committee consisting of current APU students, in collaboration with "Base Event", the APU University Festival Committee. The purpose of this event was to jump-start exchange between new and current students, to offer support to the new students in adjusting to their new life at APU, and also to drum up new members to APU's student clubs and societies. 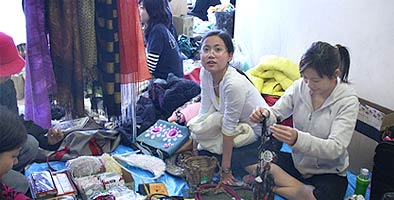 One of the new initiatives of this year's festival was the active participation of new students, including some as MC of stage events and others running food stalls.

Prior to the festival, a representative of "Base Event", Mr. IZUMI Keisuke (APS2, Japan) expressed his hopes for the day, "We, the members of Base Event, began preparations in December last year to organize a great event and to make the new students feel really welcome. We wanted to organize a fantastic day for all the new students, who are beginning their classes full of hope and wondering what university life is all about."

The festival was a roaring success with stage performances by many of the student circles, exchange between current and new students with a "True or False" quiz about countries around the world, a variety of food stalls, and a flea market. As well as many other events, there was also a photo exhibition of the activities of APU's volunteer organisations "Habitat APU" and "PRENGO", and the "2008 PicaPica Welcome Festival" ended in great success. 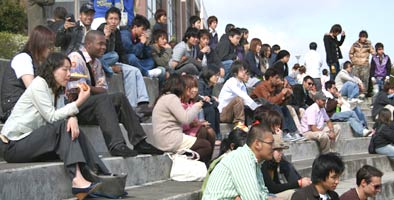