On Friday, June 13th, the "Ceremony for Conferment of the Title of Professor Emeritus of Mie University for SANGA-NGOIE Kazadi, APS professor" was held at Mie University
Professor SANGA is originally from the Democratic Republic of Congo. After acquiring his Ph.D. (Science) from the Graduate School of Science (Geophysics), Kyoto University, he worked for Mie University as a professor and associate professor for 14years. His research and academic areas are mainly Environmental Sciences and Earth Science. Specifically he has made environmental assessment through recognizing land and forest development from satellite photography. He has also checked climate change by using GIS (Geographical Information System).

He started his current position at APU in April 2007. He has also worked as the APU International Cooperation & Research Dean.

Mie University evaluated his longstanding efforts and his career and decided to give him the title of Professor Emeritus of Mie University. 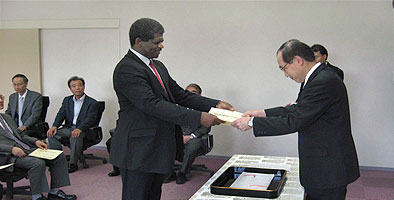