The weekend of August 2nd and 3rd 2008 saw APU play host to a two day symposium on global warming and sustainable development. Seventy four participants, largely consisting of APU students, were in attendance for lectures from experts on environmental issues and group discussion workshop sessions. The topics covered included the relationship between climate change and sustainable development, Japanese climate law, and what action individuals and institutions can take to combat environmental problems. 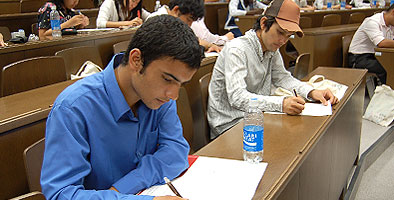 Lectures were given by Hitomi Kimura, Researcher of the Institute for Global Environmental Strategies (IGES), Ichiro Miura, Representative of a local global warming action NPO, Oita Ken Chikyu Ondanka Boushi Katsudou Suishin Center, and also APU's Professor Kazadi SANGA-NGOIE.The final presentation on Sunday served to summarize the many practical ideas for action that participants had come up with in their workshop sessions. These included introducing rules requiring submission of academic reports on paper which has been printed on both sides, and also encouraging student circles to use online promotion for events rather than distributing flyers. Participants signed a proposal to implement some of their ideas and then finished off the evening with a buffet and some live music in the APU Cafeteria.

The symposium was organized in its entirety by a devoted student committee, the core of which was formed of participants from a similar symposium held last year in Hawaii. This committee took charge of all aspects of symposium preparation and promotion. To assist them APS Professor FELLIZAR Francisco P. Jr. gave a series of preparatory lectures and guidance to the committee members, while the Academic Outreach Office provided the necessary administrative support.

The organizers stated that they were pleased with the event and that they hope younger students who attended will take on the mantle of continuing it in some form next year. They were also happy to see that a large number of students are genuinely concerned about the environment and are interested in taking practical action. The weekend provided such students with the opportunity to network and exchange ideas with other would-be environmental activists.

Symposium advisor Professor FELLIZAR stated that the student committee had done a fantastic job putting together the event with only very limited time and resources, and that this is definitely an event that he would like to see continued on an annual basis. 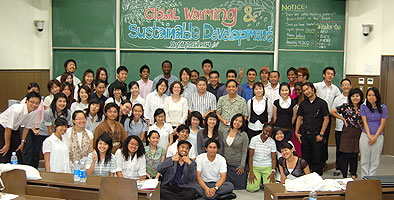