From Monday August 11, 2008, till Saturday August 23, the APU CYCLING CLUB Charinko Days rode around Kyushu by bicycle to promote the National Sports Festival in Oita. 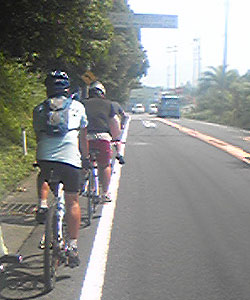 On Monday August 11, the members departed from JR Kamegawa station, Oita. On their journey through the different prefectures, they set up "National Sports Festival in Oita" promotional flags at stations and downtown areas and handed out about 1000 "National Sports Festival in Oita" pamphlets. They also handed out 2000 original postcards designed especially for this event. All of the members completed the 1050km course and arrived safely back at JR Kamegawa station on August 23.

Representative of the APU CYCLING CLUB, TSURU Yusuke (APS2, Japan) spoke of his memories of the ride around Kyushu "The trip around Kyushu was planned as a way to welcome the new entrants but then we also planned to promote the National Sports Festival in Oita as we traveled to get the word out to as many people as we could hoping that the Festival would be a success".

The APU CYCLING CLUB was established in 2005 and currently has 30 registered members including 5 international students. The club usually practices on Saturday every week in Oita Prefecture and during the quarter breaks and long vacations they also go cycling inside and outside Oita Prefecture.

For more information about the APU CYCLING CLUB please follow this link
http://charinkodays.nomaki.jp/ 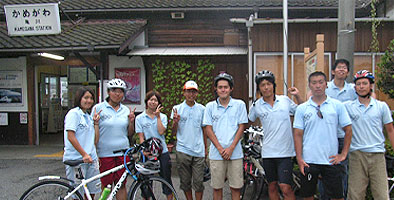