On Sunday September 28, 2008, members of the APU volunteer circle Habitat APU arrived at their goal destination of Matogahama Spa Beach, Beppu City, after 10 days of cycling around 3 prefectures (Kumamoto, Fukuoka and Oita) giving presentations at high schools and raising money for educational instruction in various regions. 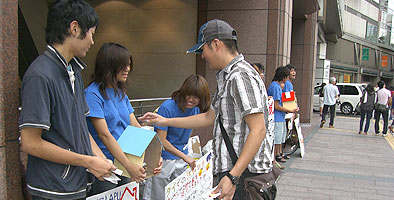 All of the members reached their goal safely at 2pm despite the bad drizzly weather. 10 members of Habitat APU made banners and were glad to see them arrive at their goal destination Matogahama Spa Beach.

The "Charinko Purezen" (Bicycle charity event), which was a first test run for Habitat APU, was planned with the aim to inform people about the activities of Habitat and about global poverty. The group held street appeals and gave presentations at high schools while moving through Kumamoto City, Fukuoka City and Kitakyushu City. These charity events received the endorsement of many people and they raised a total of 230,000yen. The money collected will be donated to Habitat For Humanity International, their parent organization, and will be put to use as part of the funds for housing construction and to fund future activities. 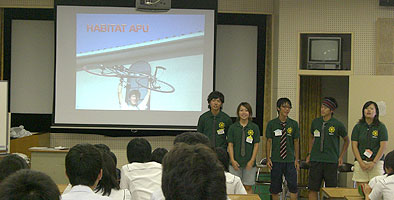 Looking back on the plan, representative of Charinko Purezen TSURU Yusuke (APS2, Japan) spoke of his happiness at their achievement "There were some members who fell off their bikes due to the bad weather but all of the members made it. During our fundraising there were people who after reading the pamphlets we handed out, came back to give a donation. We also received donations and encouragement from APU parents and guardians. Through this I was able to feel the links between people. Also, through this challenge, I once more realized a house's importance". 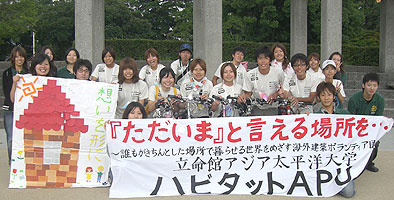