On Friday October 24, 2008, APU concluded a partnership agreement with Yuan Ze University, Taiwan.
At the signing ceremony Yuan Ze University President Perng, Tsong-Pyng and his entourage of 29 attended and from the APU side, President Monte CASSIM; Dean, College of Asia Pacific Studies YAMAGAMI Susumu and Director-Secretariat ASONUMA Kazunari attended. During the ceremony President Perng, Tsong-Pyng said "We feel very honored by this agreement with APU. We feel that we can learn a lot from APU as we set our goals for future development" to which President CASSIM replied "I hope that this the start of strengthening relations with between our two universities and we ask for your continued cooperation and support".

Yuan Ze University is a general private university in Chung Li City, Taoyuan Prefecture, TAIWAN and changed its name in 1989 from Yuan-Ze Institution of Technology to its current name. It currently has 4 colleges and approximately 10,000 students.

As a result of this partnership agreement with Yuan Ze University, APU now has affiliations with 360 universities in 57 countries and regions. 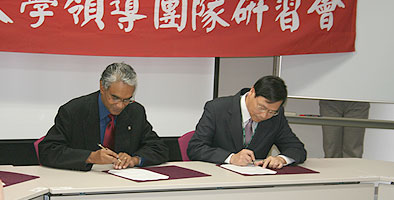