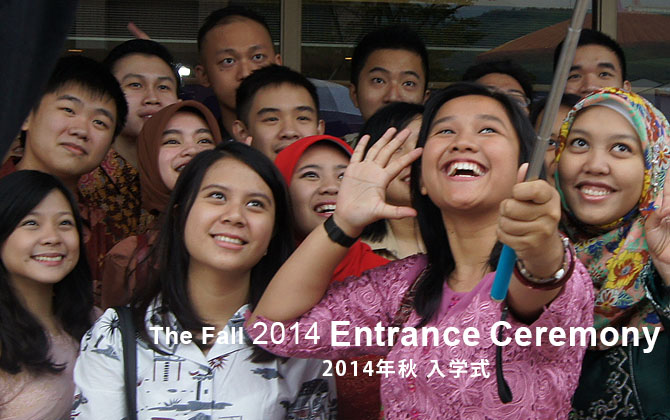 With their dreams and ambitions, students from around the globe to APU


With a 50-50 student body of domestic* and international students, APU has adopted a dual enrollment system that allows students to enroll in either the spring or fall. This system was introduced to accommodate for international academic calendars. On September 19, 2014, APU welcomed 642 (36 domestic and 606 international) new students at “The Fall 2014 Entrance Ceremony” held at the Millennium Hall, Ritsumeikan Asia Pacific University.

It was a day of celebration to mark the beginning of our new students’ lives in Beppu and, for many, in Japan. Current students also joined in the celebrations and took part in a range of performances during the ceremony including traditional Indonesian dance, Chinese Dragon Dance, and traditional Japanese drums.

With their dreams and ambitions, students from around the globe just started their new life at APU. Through life on the multicultural APU campus, often referred to as a microcosm of the wider world, students will accumulate a wealth of diverse experiences and practical hands on learning, and no doubt form global networks and the skills and capabilities necessary to unlock their future.