On Friday November 14, 2008, "Noh" was performed at the APU Millennium Hall hosted by the Noh-gaku Circle.Mr. SHIOTSU Akio (APU part-time lecturer) who was designated as an 'important intangible cultural asset' and winner of the Order of the Purple Ribbon award in fall 2008 gave this performance along with 8 other Noh artists from Tokyo, Osaka and Fukuoka. Their performance was attended not only by students interested in traditional Japanese performing arts, but also many local citizens who enjoyed a Noh performance which can seldom be seen in Oita.

Looking back on the performance, Mr. KITA Keishiro (APS4, Japan), a representative of the event group "Noh" -the group charge of project management of this event in cooperation with Noh-gaku Circle -said "I am very happy that we were able to fulfill our long-time objective of holding a Noh event at APU. I hope it provided an opportunity to take another look at Japanese culture not only for International students, but for Japanese students as well."

The Noh-gaku Circle was established in the fall of 2005, and currently has 5 members who hold rehearsals three times a month in the Multipurpose Hall. Their upcoming plans include a workshop to be held in January of next year in order to deepen people's understanding of the world of Noh and they intend to continue to actively introduce people to the appeal of traditional Japanese arts. 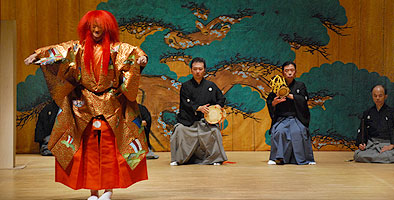