One member of the group, TRAN Quynh Trang, taking part in the general Finn/Fly division (female), was able to successfully reach the finals and claimed the silver medal in fine form although this was her first time to participate in an official match in Japan. Ms. TRAN fought defiantly against her black-belt opponent and never yielded ground. However, she was beaten due to a leg injury she received during the match. After the match, however, she received a big round of applause as she received the silver medal together with the Fighting Spirit Award (trophy).

After the match Ms. TRAN spoke of her joy at receiving the medal, "I was nervous because this was my first tournament, but thanks to the tough training I put in everyday I was able to produce a good result. I want to use this match as a starting point to put in an effort towards the next tournament."

This tournament, which was the first for most of the competitors, was a chance to appreciate the high skill level of the competitors and reflect on oneself. In the future, they will visit and deepen exchange with Tae Kwon Do training halls in Oita Prefecture, follow their master's guidance and spruce up their experience and skills. 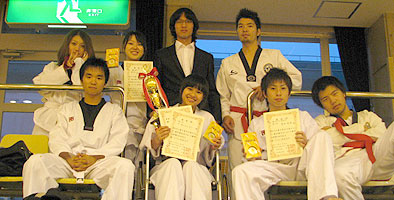