On Monday December 15, 2008, the Student Group Cultural Fiesta Executive Committee gave its "Cultural Fiesta2008 -All We Need is Love" -a song and dance performance at the APU Millennium Hall.Cultural Fiesta, now in its 3rd year, is an event where students of different nationalities come together to give performances of various countries' traditional cultural dances and songs and is an event unique to the multicultural and multilingual APU. THE TROPICS-SALSA (a Latin American dance circle), Araumaza "Chiyo", HAKA (a New Zealand traditional dance circle) and Chinese, Vietnamese, Myanmarese and Indian Student Circles performed under the theme of "love". They tried to express the different forms of love through their song and dance performances.
During the intermission, messages with images of students and faculty staff under the theme of "love" were screened. The Hall was filled with students and members of the public, which made for a warm atmosphere from start to finish.

Looking back on the event, Executive Committee Representative TANAKA Moeko (APS3, Japan) spoke of her happiness at the success of the event and gave a message of love, "We held an event to get across to everyone the 'importance of love' but we also received love from many people. This is thanks to the cooperation we received from all the staff and performers and also from these who came along to see our performance. I feel very thankful to you all." 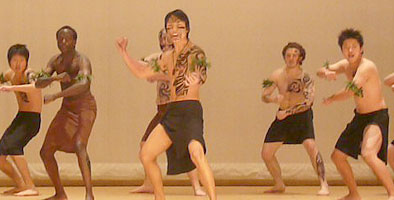