From Monday, December 8, 2008, until Friday 19, the student circle "DAGADU" are holding a photo exhibition of photos provided by the Universitas Gadjah Mada Photo Club (Indonesia) at the Meeting Space on the 2nd floor of the Student Union Building. 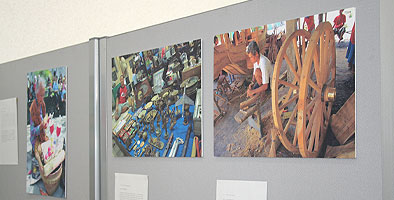 At the photo exhibition entitled "Indonesia/Yogyakarta Photo Exhibition DAGADU!!!2008" there are photos on display of the citizens of the Indonesian city of Yogyakarta working hard in their jobs. Through their faces we can get an insight into the life and culture of Indonesia.

This is being held as a mutual photo exhibition between DAGADU and the photo club of Universitas Gadjah Mada -an affiliated university. At the same time, DAGADU is accepting many photos from students and the general public with the theme of 'work'. The selected photos will be sent to Indonesia and presented at Universitas Gadjah Mada. Photos are being accepted at the photo exhibition and at the booth situated in the Cafeteria and will continue to accept photos after the conclusion of the exhibition until Friday, January 16, 2009.

DAGADU is a student circle which aims to introduce Japanese and Indonesian culture and life to deepen mutual understanding. Its activities center on photo exhibitions. It was established in 2008 by 16 students taking Indonesian language classes and Indonesian international students. One Indonesian member of the group said, "I hope that general members of the public, not just Japanese and international students, can learn the good points of Indonesia through this photo exhibition." 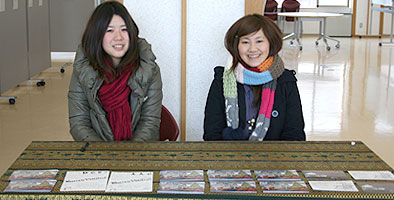