On Thursday, January 22, 2009, the "Fourth Local Networking Meeting with Ambassadors" was held at the Ritsumeikan Tokyo Campus through the cooperation of the Cabinet Office and the Ministry of Foreign Affairs. This is the 4th out of a total of 5 meetings which each target a different region. This meeting welcomed ambassadors and representatives from West and Central Asian countries. 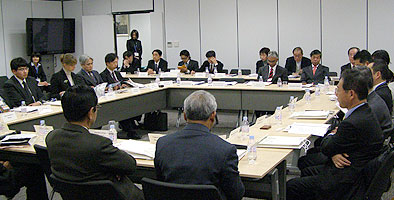 Four ambassadors, 1 envoy and 2 secretaries participated in the meeting in addition to Cabinet Office officials, university representatives and municipal representatives such as mayors.

Following this, the attending ambassadors spoke of their countries relationship with Japan and gave their opinions regarding regional revitalization. H. E. Genesh Yonzan TAMANG, Ambassador Extraordinary and Plenipotentiary of the Federal Republic of Nepal said, "We currently have over 3000 students studying in Japan of which 36 are at APU. I hope that the friendly cooperative relationship that my country has with APU continues and that we have more students studying at APU in the future."

After that, there was a light meal for the participants who moved to the mutual exchange meeting. At the exchange meeting local specialties of the participating municipalities were served such as apple juice from Nagano Prefecture and Fuyu Persimmons from Minokamo City. 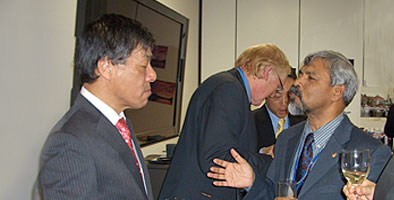