On Friday, January 30, 2009, APS Professor TSUKADA Shunso gave a lecture entitled "Career Development and Professionalism" at F Building, 209. The lecture discussed professionalism, possible career paths and the changing job market environment in the international public service. This lecture was held as part of the career seminar series and was attended by many undergraduate and graduate students who hope to pursue careers in international organizations. 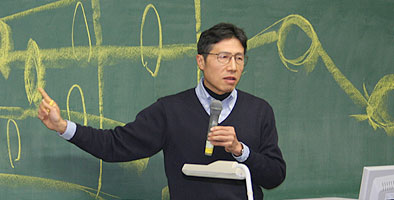 Professor TSUKADA described a job market which could be "a jungle or a medowy pasture" in which one can find great opportunity for sharpening his/her professional skills and expertise, but also has the hidden risks of loss of employment. During the lecture Professor TSUKADA described how people develop a profession by moving and developing through different stage of career. Change in companies/organizations would be often effective ways for increasing chances for success, instead of simply joining one company and slowly progressing up the ladder. He therefore described the importance of consciously planning ones career.

He then continued to describe a more favorable and popular approach by which one enters an organization at his/her mid-career. By the time when you reach this stage, you would have extensive work experiences and significant achievement you can demonstrate to the organization, you would have a better chance to be able to be engaged by international organizations through demonstrating your skills and achievements which, from the organizations perspective, are more highly valued than simple academic qualifications. Therefore think of your career in terms of stages leading towards your final goal." 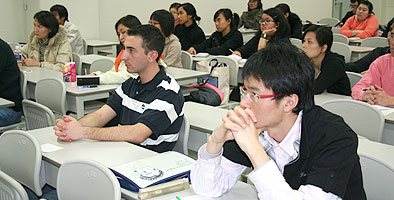