The APU Premier Organization "Model United Nations" is holding their "UN CAMP2009" at the AP House Meeting Room from March 16 through to 18, 2009. 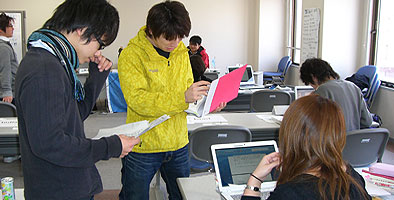 The Model United Nations involves participating students taking on the roles of foreign diplomats and simulating United Nations conferences. Participants are educated first hand in the decision-making processes used by the United Nations.

The Model United Nations began at Harvard University in 1923. Activities in Japan started in 1983, under the advisement of Ms. Sadako OGATA, who was lecturing at Sophia University at the time. Currently, more than 400 students participate in Model UN activities throughout Japan.

The UN CAMP is held every August as a pre-session to improve the quality of Model United Nations Conference Kyushu Summer Session. It is also held to strengthen the activities of the new 2nd year students. Members of the Model United Nations Kyushu Branch (APU, University of Kitakyushu) participated.

The approximately 15 participants simulated a WTO Agriculture Committee Special Meeting under the theme of "Agriculture and Free Trade".

At the First Meeting held on March 16 under the theme of the deregulation of trade, one student from countries and regions such as America, the EU, Japan, China and India engaged in a lively debate keeping in mind the best interests of their countries.

Representative of the Model United Nations, APU TAMAI Marina gave her enthusiastic impressions of the meeting.

"These trade negotiations were not just a debate on economic stimulus –we were also able to discuss the recent issue of poverty in developing countries. On the second day full scale negotiations will begin so I want to consider the issue of poverty in developing countries while seeking what is in the best interests of the USA –the country I am to represent." 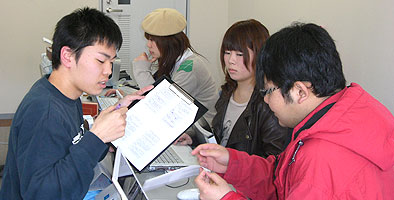