The Beppu Hatto (The 8 hot springs of Beppu) Onsen Festival will be held across 101 sites in Beppu City from Wednesday, April 1 till Sunday 5, 2009, and is being held by The Beppu Hatto Onsen Festival Executive Committee. The Beppu Town Planning Promotion Committee –organized by APU students and students in the prefecture –will be providing their cooperation.

The Beppu Town Planning Promotion Committee was established in 2003 by primarily APU students out of the idea of making Beppu into a city to be even more proud of and loved. They are aiming towards town development and are planning for and hope to carry out a festival which "will last 100 years".

This will be the 5th time our students have provided their support for this onsen festival and will be on putting on their white gowns and parading with the portable shrine on two occasions –Wednesday 1 and Sunday 5.

There will also be a range of exciting events during the festival such as free entry to 101 different onsens (until April 3), a fun lottery and the Ogiyama Fire Festival.

We are currently looking for people to help carry the portable shrine with the students during the festival. How would you like to cooperate with the Beppu City town folk by giving thanks to the earth and the onsen it blesses us with? 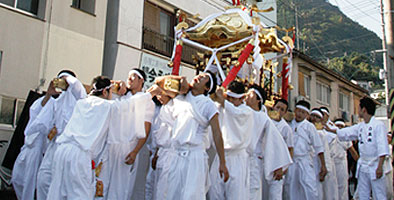